MMA fandom was rocked to the core when reports of Khabib Nurmagomedov’s retirement from the sport of MMA surfaced. Nurmagomedov retired from training in 2020 – however he was still active as a coach and a promoter.

This was all set to change in 2023 when Khabib revealed plans to dedicate more of his time to his family and business ventures.

Javier Mendez has known Nurmagomedov for a long time and supported him throughout his career. He assisted Nurmagomedov throughout the course of his UFC career and now cooperates with him in order to coach other AKA guys.

Mendez is already considering how Nurmagomedov’s exit will affect his coaching moving ahead. He told Submission Radio:

“I’ve been working Islam Makhachev’s corner since 2015, every fight except the Russia fight I didn’t work that one but every other one I’ve been in Islam’s corner.”

“Khabib has not, so not having Khabib there it’s, for me, it’s a great thing to have him there and I would want him there but I’m okay with him not being there either. Because Islam Makhachev is such a great student of the game and he knows what he needs to do. When you formulate the game plan, give him the game plan, he goes out and executes. He’s really the best at that because Islam Makhachev can do everything.”

“I told (Khabib), just remember you can always come back if that’s what you choose to do and just your presence there in the corner with us is a big push for the guys. So you don’t have to train the guys you can just show up fight night.”

“But he, at the present time, he’s choosing to just stay at home and be with his family and how can you fight that? Like there’s really nothing I can say that’s more important than family so you know I’m with him 100 per cent on what he wants to do.” 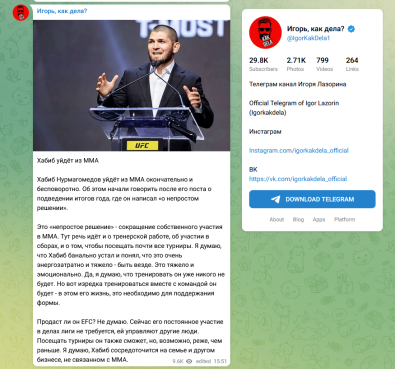