On January 2nd, White made the headlines after a TMZ published a video showing him striking his wife at a New Year’s Eve party in Mexico.

White’s wife Anne struck him during the confrontation, which took place in a Cabo San Lucas nightclub. The UFC president then promptly hit Anne back.

Dana White accepted responsibility for the situation and apologized, saying that he now wanted to concentrate on his family.

“ You don’t put your hands on a woman ever. My wife and I obviously love each other. We’ve been together for a very long time. We’ve known each other since we were very little, and this is just one of those unfortunate situations.”

Fans and several mixed martial artists have harshly criticized Dana White for his behavior. However, Endeavor (the parent company of the UFC) has chosen not to react. Which is especially hilarious if you consider the fact that it was Endeavor CEO Ari Emanuel who led the way with pitchforks at Kanye West and Mel Gibson for their respective scandals.

Additionally, there has been little to no coverage of the incident by ESPN and other affiliate media groups.

ESPN journalists were discouraged from tweeting about the incident.

“If #ChrisBrown, #BobbyBrown or #AntoinioBrown did what #DanaWhite did, the media wouldn’t stop talking about it!! What can Brown do for you? ………Be White!! #TeamDl“

If #ChrisBrown, #BobbyBrown or #AntoinioBrown did what #DanaWhite did, the media wouldn’t stop talking about it!! What can Brown do for you?………Be White!! #TeamDl

Hughley subsequently posted his message on Instagram, along with some further criticism of the situation.

“What can BROWN do for you?” Apparently not a damn thing! If that had been a brotha, it’d be NONSTOP coverage, dredging up a playground fight from the 3rd grade, scouring old tweets, you name it. #DanaWhite ‘s ENTIRE LIFE is immersed in brutal, physical violence, he’s amassed a fortune from it. Where are the salacious headlines?? Where’s the pressure?? Ohhhhh, he apologized🙄 #WhitePrivilege (PUN INTENDED) scores a 1st round knockout yet again. #TeamDL” 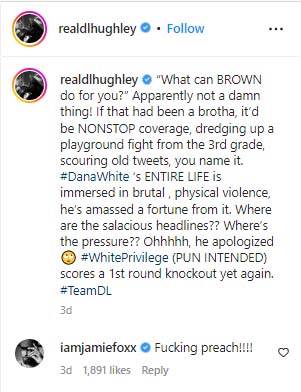 American actor Jamie Foxx promptly praised the remarks and commented the following to the post: