Jake Paul has long criticized the way UFC reimburses athletes for putting their health on the line.

White has had a particularly tumultuous time with the reveal of his cash gift to a young twitch streamer. As if that wasn’t enough, White also doubled down on his comments regarding UFC pay and slammed boxing one more time.

Jake Paul is a former YouTube sensation turned boxer. He and White have been at odds for a while now about how he treats his competitors. In an attempt to get a bout with former two-weight champion Conor McGregor, Paul initially attacked White over athlete pay. Despite the unlikely boxing clash, Paul is still pushing for better treatment of UFC athletes.

While Paul might have ulterior motives for his comments he certainly brings a lot of eyes to the issue. While it was previously possible to go on Joe Rogan’s Experience and unleash fanfiction that UFC athletes earn millions it’s way less likely nowadays when we know that UFC earns more from live attendance alone than it pays the featured athletes. This past weekend UFC grossed $1.7 million on tickets sales alone – and had reimbursed the athletes under that. Not to mention that ESPN pays roughly to the tune of $10 million for the rights to stream each card.

Paul wants White to boost the minimum guaranteed wage for in the promotion—currently $12,000—to $50,000. He also wants White to ensure long-term healthcare and a higher revenue share. In contrast to other sports leagues like the NFL and NBA, which split around 50% of their entire earnings with their athletes, the UFC pays its fighters between 16 and 18% of their overall revenue.

After White’s most recent effort to justify compensation model, Paul tweeted at him: “No major sports organization pays its athletes as poorly as Dana White and the UFC. If you don’t see that then you are one of Dana’s sheep.”

“They keep talking about selling out 21 events in a row but never talking about raising fighter pay, giving them healthcare and fair revenue split.”

UFC celebrities like Jorge Masvidal, Jon Jones, and Francis Ngannou have all advocated for bettering the wage circumstances for athletes in the organization. White argued that money had “destroyed” the sport, despite the fact that many boxing stars earn millions more than UFC competitors. 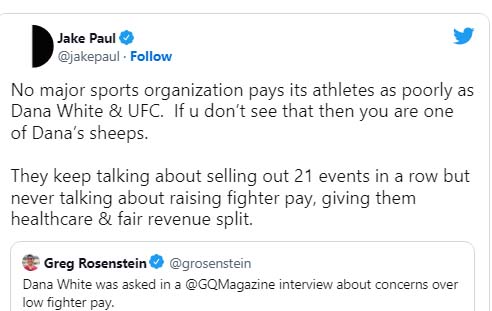 White told GQ, “There aren’t too many things you can talk s*** about with the UFC, if you look at what we’ve done with the business in the last 22 years, incredible.”

“Boxing has been absolutely destroyed by money and all these other things that go on.”

“It’s never going to happen whilst I’m here, believe me these guys get paid what they’re supposed to get paid. They eat what they kill, they get a percentage of the pay-per-view buys and the money is spread out amongst all.”

White added: “If you don’t like it, there’s a simple solution to this problem. Go start your own MMA organization, no barrier to entry. Knock yourself out, pay them whatever you want to pay them.”

“It’s been done before, but how’s it worked out for other guys? Not well. Mind your business.”