Luke Rockhold came out swinging and went the distance – for the first time in a decade. Yet it wasn’t enough to escape criticism. While the majority of MMA audiences were glad to see Luke land shots and put in a solid performance, resident youtuber Jake Paul was not as amused.

‘these people are paid for skill and that was dog s**t’ Paul replied to Helwani’s mind blown reaction to UFC 278 co-main.

Helwani was quick to refute Paul and provided a little back story on why Rockhold wears that sleeve.

“Luke has been doing this for over a decade. He hasn’t fought for 3+ years. He almost had his leg amputated. Broke his jaw in his last fight. This has nothing to do with you. I’ve never said that about you. If you can’t respect what that man just overcame I don’t know what to say”

But Paul wasn’t quick to back down from his assessment.

“Imagine me on my knees begging for air in my fights… what would people say? Im a legend.. lol no they’d call me a YouTuber … YALL are sick and twisted with your favoritism and delusion”

Does he want a binky?

Fighting is the only sport where people listen to excuses.. in other sports your CUT and never talked about..

He also didn’t over come anything? He lost.. go home…”

Paul is either playing the heel or he’s really that delusional. Getting to a place where people actually care about what affected your performance in MMA alone is more damage than Paul’s entire boxing ‘career’. 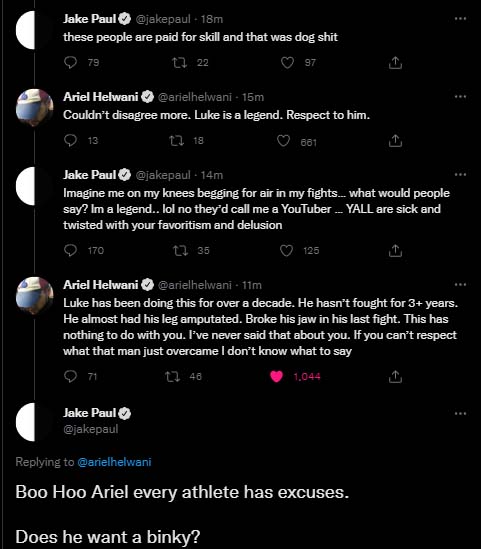 It’s especially interesting to see Paul slam someone who advocated so hard for athlete pay throughout the week – and did it all for future generations considering he retired in the cage.

It very well might be that Paul is attempting to set up a future boxing bout against Rockhold – after all Rockhold has a built in fanbase, UFC credentials and is roughly in the weight class Paul boxes in. On top of that, Rockhold has long been plagued by ‘glass chin’ commentary not to mention the fact that he actually was close to losing his leg.