Social media celebrity Jake Paul has had his 6th boxing match that he regarded as his hardest challenge in his professional boxing career. The 25-year-old faced MMA legend Anderson Silva on October 29.

The two exchanged blows for 8 rounds with Jake having a highlight of knocking down the former UFC middleweight champion in the 8th round. They continued to box until the final bell rang and Jake came out as the winner via unanimous decision.

The build-up for the match was pretty hyped, with two former UFC stars Chael Sonnen and Georges St-Pierre participating. However, during a recent Impaulsive episode, Jake claimed that he the PPV numbers were “disappointing”.

His brother Logan Paul talked about the lack of crowd reactions during the event and asked Jake about the PPV buys.

“All my other fights were during COVID when no one had anything to do and anything to watch. I had to fight this year. I just had to get it f**king done. I’m sick and tired of waiting around.” Jake said.

“Not only did I make zero, but I lost millions of dollars just running a goddamn organization with fifty employees. I think it will probably go around 200-300k, which is kind of upsetting.”

Prior to the event, Anderson Silva revealed that he got knocked out twice while training to face Jake Paul. He partly blamed the Brazilian for the decrease of PPV pre-order.

“On the pay-per-view buys thing, the pre-buys were going crazy, and on Wednesday when the news came out about Anderson saying that he got knocked out or whatever and the fight was in jeopardy and this press came out… The pre-buys tanked all the way down.” Jake said.

The event aired as a Showtime PPV with a price of $59.99 meaning the promotion earned between 12 million and 18 million. 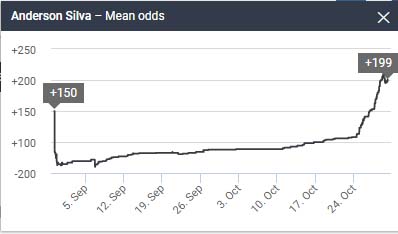 The odds for the event reflect what Paul was saying with Silva ending up as +199 underdog to Paul’s -250. Early on there was briefly a time where Paul was the underdog, helping move the line.

It’s unclear if lack of interest means that people were mostly paying to see Paul get knocked out or if the idea that Silva is in for a sure fire loss was such a repellant.