Sean Strickland appears to be moving off of Pat Barry and Jim West for now. After a successful stint trolling the MMA coaches that ‘train’ their much younger disciples, Strickland is moving on to trying to get a rise out of Ali Abdelaziz and his clients.

Strickland had started off the odd spree by remarking on Nurmagomedov’s bedroom activities.

Khabib Nurmagomedov has been married since June of 2013 – and reportedly has 3 kids.

But Strickland didn’t stick to that – he went on to make more conjectures.

From there he moved on to another hot topic- religion of Islam.

Now Strickland is currently ranked at number 4 at middleweight – along with Paulo Costa – whom he declined to fight.

Looking at the sketchy contents of his timeline, one conclusion seems to be that he’s trying to antagonize Nurmagomedov’s longtime manager Ali Abdelaziz – because why else include the following jibe at Kayla Harrison. 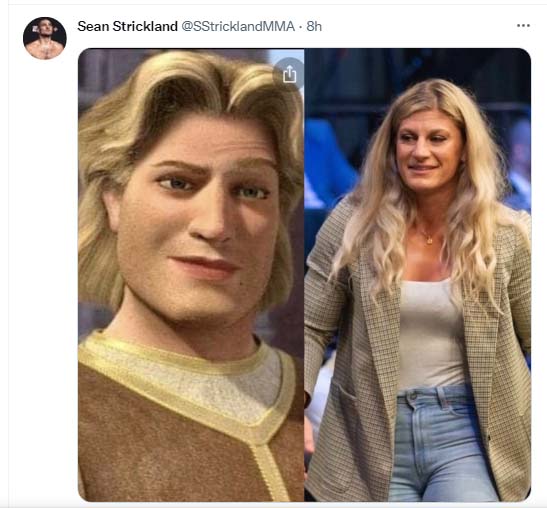 Of course it could all be a ploy for attention considering that insulting the Prophet flooded his DMs with threats.

But he’s also an Equal Opportunity Offender – he also took shots at the ‘management’.

One reason the Ali Abdelaziz theory doesn’t really make sense is because he represents notable contender Marvin Vettori. Strickland previously went on record that he’s good friends with Vettori and would prefer the two not meet inside of an octagon.

As is – the future of the division is under a question mark. Longtime champion, Israel Adesanya, has been booked to meet Jarod Cannonier and Paulo Costa has agreed to a match up with former Middleweight champion Luke Rockhold.

Of course, it could also be that Strickland saw all the attention Andrea Lee cornerman, Tony Kelley has been receiving and wanted a piece.