Iranian wushu athlete Elahe Mansourian had some not so kind words for a fellow Iranian. The wushu athlete took aim at the Iranian Hulk following a series of embarrassing outings and excuses for his vastly different appearance.

Meanwhile the Hulk (born Sajad Gharibi) has been trying his best to justify his appearance. He cycled through a number of excuses from Covid to the promoter choosing peculiar camera angles in order to complement his opponent Martyn Ford and slam him.

The two were long in talk for a bout – with the combat sport evolving through time. Back in the day there was talk of MMA, then bare knuckle boxing with the two finally landing on boxing and setting a date.

But after Gharibi was shoved he felt utterly embarrassed.  Rumors that his physique was a result of photoshop began swirling once again, and this time the evidence appeared more compelling then ever.

Martyn Ford still can’t get past his canceled bout. The Englishman recently revealed he was mislead to expect a 6’4″ opponent (193cm).

“We were told from guys on the ground in Iran that this guy was huge. Not as big as in his photos maybe but that he was massive. Six foot three or four monster is what we were told.”

Recently Gharibi addressed the shots that came out of the face off telling an interviewer in Iran:

“It was a mischief by the Boxstar organization. Martyn’s height is more than two meters.”
“What they did was, that they used a really tall tripod – they recorded from afar.”
“While recording from atop, it was exactly like if – it was positioned at Martyn’s level – and positioned and pointed at me from below ”

The journalist went on to ask:  “You mean, it was top down?”
Hulk confirmed: “Exactly.  Well, Martyn is tall and would normally show as bulkier compared to a person with the camera is recording at his level ”

Mansourian has since also tried her hand at kickboxing. 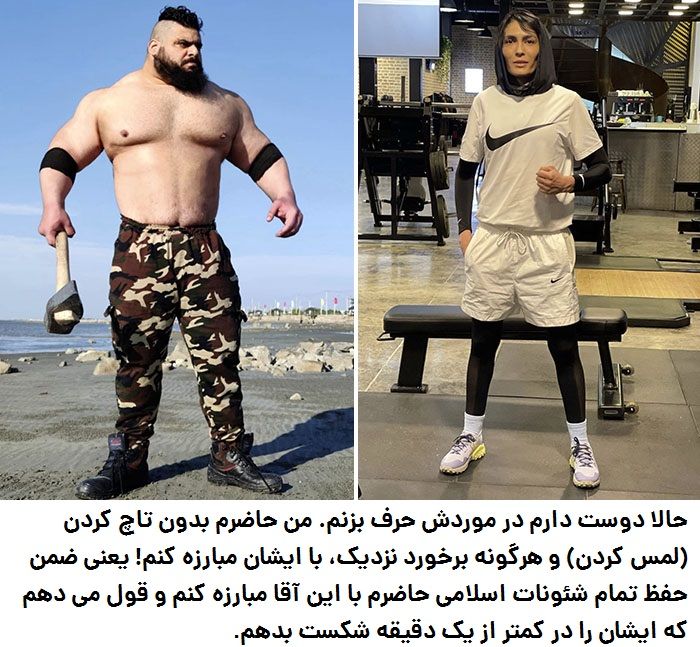 According to reports Mansourian claimed she would ‘I Will Defeat Hulk Within A Minute’.

As per another report, she added: ” I am ready to fight the Hulk Photoshop without touching or any physical contact and defeat this gentleman in less than a minute”