Former two-division UFC champion Henry Cejudo has a lot of faith in the super prospect Khamzat Chimaev – even though he’s not the one training him. Cejudo believes that Chimaev will reign the welterweight division soon. But Adesanya is a middleweight – Cejudo also believes Chimaev is the only one who can beat the current middleweight champion Israel Adesanya.

Having recently defended his middleweight title against Robert Whittaker, many people debated on who can beat Adesanya. He has 10 victories since he joined the UFC and the only loss he got was during his light heavyweight debut against Jan Blachowicz. As a reminder, Adesanya opted to not bulk up for this fight. Many believe only champions from other divisions could take him down. Though, some misguided voices believe Whittaker won that fight.

In his appearance in the latest episode of ‘The Triple C and The Schmo Show’, Henry Cejudo said Khamzat Chimaev could beat Adesanya using his flawless wrestling skill. Cejudo also said that Chimaev is a whole another animal due to the extreme training Chimaev does every day.

“The guy that will stop [Israel Adesanya] is actually a 70 pounder and the name is Khamzat Chimaev. I believe Chimaev is a whole another animal dude. His wrestling, his confidence. I mean this dude…From what I have heard from a lot of people, this dude literally trains like nobody has ever seen before. When you are a wrestler and you’re like that and he’s driven. I don’t think there’s nobody on the planet. I can see him easily beating Israel Adesanya.” Cejudo said.

Speaking about confidence, Khamzat Chimaev simply would fight anyone the UFC offered to him.

If say I want to fight everybody it means everybody, I don’t have to call every single fighter by their names. BMF belt is mine, UFC belt is mine too. I’ve heard there is gonna be event 5 of Mars in Vegas. And I don’t understand why I still don’t have opponent.

In a now-deleted tweet, he also called out Adesanya following his victory at UFC 271.

Khamzat Chimaev has gone 4-0 in the UFC and he rose to fame after he fought Li Jingliang in October last year where he lifted Jingliang and talked to Dana White. He also showcased his grappling skill against Bellator MMA black belt that looks super effortless.

Cejudo might not be too far off – after all Chimaev looks huge – even compared to former light heavyweight champion Jan Blachowicz. 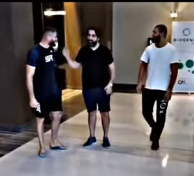 However, a top-rank welterweight fighter would be needed to test if Chimaev is actually such a great fighter or simply an overhyped prospect. And number 2 ranked Gilbert Burns is rumored to take on the Chechen wolf.