Gordon Ryan has been the most polarizing voice in the world of professional jiu jitsu ever since he burst onto the submission grappling scene back in 2016. Ryan, 26, has been strictly competing in submission grappling and had given up on a transition to the Gi (which he previously announced several years ago).

The world of Gi grappling (aka Gi jiu jitsu) is dominated by a for profit federation IBJJF – which holds the World championships every year and had only offered cash prizes for the winners of the black belt divisions in the last several years.  In case you’re not familiar – IBJJF instituted cash prizes back in 2019. Cash prizes are dependent on the amount of participants per division. 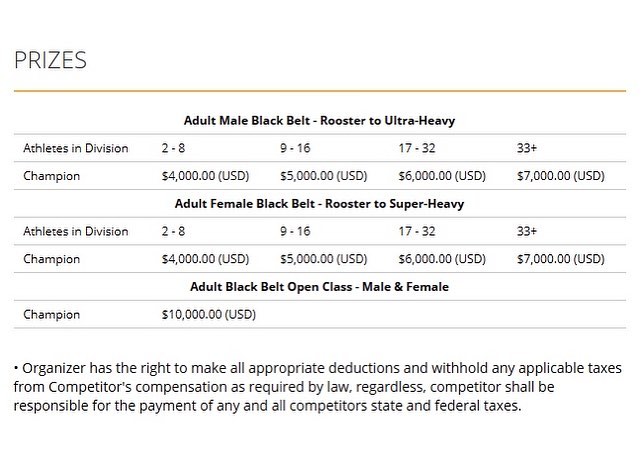 To give you a proper idea as to how much money is made – the entrance fees alone would gross about $300,000 for the organization (pre pandemic). This is of course in addition to a yearly required membership for all participants.

As if this profit isn’t enough – IBJJF also has an exclusive streaming deal with Flograppling which is bound to make their profit margins even higher.

This is why jiu jitsu competitors have been gearing more towards submission grappling in the last 5 years. By comparison ADCC requires no membership and no belt level – and on top of that you’re vying for a 2 to 3 times bigger prize – all for the low cost of a Trials entrance fee (which runs around 100$).

To make matters worse, IBJJF recently instituted a policy that dictates that you are not allowed to ‘close out’ and that if you do – you forfeit the cash prize. Closing out is the act of surrendering to a teammate in the finals as a sign of respect.  This policy change caused a backlash considering the prizes are already symbolic enough.

A Nogi BJJ competitor Gordon Ryan saw this policy change as an opportunity to shine a light on some unreasonable behavior from his competition. Take a look at the video rant:

“So, funny story. The most recent World Championships that had 1000s and 1000s of competitors. And the stands were completely empty on blackbelt day.”

“The people who do the sport as pro athletes didn’t even stay. That’s how bad it is.”

“And now guy like (Felipe) Pena is demanding more money for the finals, which sure I agree with to some degree, but you can’t demand it.”

“If there’s no reason to give it to you, you don’t bring anybody in to walk. literally nobody cares to watch you. So why would the IBJJF pay more money for the finals? At the stands are empty? You clearly don’t bring an audience”

And the roast didn’t end there. Ryan also roasted longtime nemesis Erberth Santos:
“This is another guy. Like Erberth shows up to compete. And he’s got like a 50% chance of just quitting in the middle of the match. For no reason whatsoever. Who wants to watch that? I’ve been talking about this for literally since I got my, like, even before I got my black belt, that athletes should be that should be paid more and me to do something about it. So I’m glad athletes are finally speaking up. But certain athletes – she had more – like Erberth literally has more losses by quitting for no reason that I have losses total in my blackbelt career. What organization should have to pay him to show up? ”

“The only reason that any of these guys are ever talked about is if they’re the same sentence with my name. ”

“And then they demand twice as much or three times or four times as money, as I’m asking for to compete against me. When literally nobody wants to watch them. Andre really thought that he was gonna have a ADCC pay him a million dollars, and I was gonna do it for free.”

“I posted on a thread one time, like, I’m happy to fight Andre for free, like I don’t even- I just want to compete against them, because I think I’m better than them. And it’s more about a legacy thing than a money thing. And the 30, 40, 50, $100,000 and everybody would be paying me is not really that important. Especially not compared to beating Andre and actually getting a match to them after six years, like I would do for free. And Andre is like, well, I want a million dollars suddenly starts like tagging ADCC. And he’s like, Gordon said he would do it for free. And you can use his purse put into my purse, and we can get to a million dollars. Let’s do it. Andre. Nobody cares about you. You literally were the SuperFight – the biggest Super Fight ever in history with Pena last time. And all everybody cared about was watching me compete at ADCC”

“So he actually has more of a case than most people. But it’s just like an obscene amount of money he’s asking for, that, he would never get ever or generate ever.”

“I just don’t, I don’t get it. And then he accepted it for the standard purse, which is $10,000 to lose. So he literally went from ‘I want a million dollars’ to compete flat. Like just to show up, step on the mat get crushed. “