Submission grappling icon Gordon Ryan shared his thoughts on Combat Sambo and its dominance in MMA. Ryan said it’s the most effective background for the widely adopted MMA rules.

Gordon Ryan is a famous submission grappler and BJJ practitioner who is considered to be the best no–gi grappler. 27-year-old has been competed since 2011 and has collected a good amount of achievements under his name.

Recently, Ryan was asked by one of his fans about the Russian martial art, Combat Sambo.

Both Khabib Nurmagomedov and Islam Makhachev come from a Sambo background and utilize heavy top pressure in order to set up a submission. This is something that’s in stark contrast to the modern bjj meta which tends to try and dominate from the bottom which can have grave consequences in MMA.

“Gordon. How come BJJ guys keep getting destroyed on the ground vs sambo guys the last few years??? Genuinely keen to hear your input on this. Do you think there are any BJJers that could stop guys like Khabib and Islam in MMA????” A fan asked.

Khabib Nurmagomedov and Fedor Emelianenko are two of the most famous names who dominated their opponents using Sambo. Nowadays, several names possessing Sambo skill, especially from Dagestan, showed a huge threat to their opponents.

““Sambo guys” are more well-equipped to wrestle under an MMA rule set. Meaning they dominate the pace and direction of the fight, and end on top. And make their opponents carry body weight, forming a discrepancy in the work rate that leads to fatigue over time. Plus, the guys they’re fighting aren’t, in my opinion, world-level jiu-jitsu that focus on MMA, not specialists.” Ryan answered. 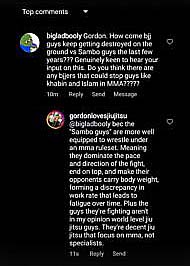 Ryan’s opinion mirrors that of former teammate Craig Jones who previously outlined how he’s trying to prepare Alexander Volkanovski for the Makhachev clash.

“So we really got to reverse engineer what Makhachev’s doing, which I’ve been trying to do on talk, and I’m trying to teach these guys how to do it so I can practice doing it.”

“A lot of safe ways to get up, heists, switches. Obviously I’m working on it in open space. Volkanovski is already really good against the fence to get up, but obviously tough it’s very hard work to start in that deep of him.”

“And a lot of guys don’t mind being on bottom because they’ve never rolled with a guy that knows how to pass guard or pin someone, so don’t know how fatiguing horrible it is.”

“Everyone thinks they know to grapple until they come across a guy that really can pass well and then suddenly they think, s*it, I’d rather be standing. I’d rather be on top.”