Coming into last night’s fight – Chikadze was the favorite. In fact many even speculated he would come out of the fight unscathed and as such would be eligible to step up and face Alex Volkanovski for the title.

The reality turned out to be quite different.

Giga Chikadze was able to withstand roughly 2 rounds before Kattar started bringing the heat – and it can be argued that he wasn’t winning the first two either.

I don’t know what I was expecting of that fight, but it definitely surpassed that. Unbelievable display of toughness.

Feel so happy for Kattar, underestimated and came through with an incredible performance full of hellbows ? pic.twitter.com/W9OG6PKJVY

In many ways the fight was a striking masterclass.

As they stood and waited for the decision to be announced their faces told the entire story. 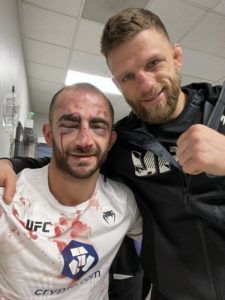 The two shared space at the medical office later on. Chikadze humbly accepted defeat and captioned the image