Oscar De La Hoya is facing even more problems as a promoter. Former boxing champion began his ventures as a promoter when he founded “Golden Boy” promotions, borrowing De La Hoya’s nickname, in 2002.

During its 20-year tenure, Golden Boy has faced nearly every kind of controversy that a boxing promotion can. The company has been accused of everything from denying boxers their arranged payment to “over-protecting” their biggest star Canelo Alvarez.

Recently, the IBF and IBO Middleweight champion Gennadiy Golovkin revealed he has a beef with Golden Boy dur to them owing him his paycheck.

In the lawsuit, Golovkin states that the promotion still owes him money for his latest bout against Canelo Alvares, which happened nearly four years ago. GGG demands around $3 million dollars in reparation.

According to the suit, obtained by ESPN, Golovkin demanded interest payments on the $9,025,351 Golden Boy still owed him in January 2021. GGG also accuses Golden boy of breach of contract, breach of fiduciary duty, conversion, constructive trust, and accounting.

Golovkin’s legal team expects to take the suit to a jury trial.

One open critic of the way De La Hoya does business is the UFC President Dana White.

White and De La Hoya have traded blows in the past regarding athlete pay.

Their beef started when De La Hoya publicly criticized the UFC for underpaying one of their champions, Alexander Volkanovski. 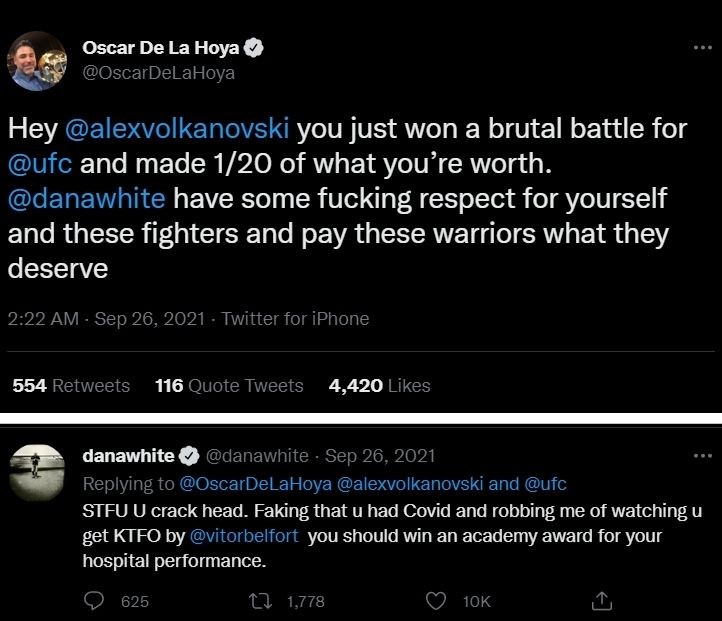 Ever since then, Dana White and De La Hoya have been sworn enemies.

White later brought up the blatant hypocrisy in De La Hoya criticizing the UFC’s pay structure when the boxer’s own promotion got outed for paying around $2k purses in an MMA event that featured the trilogy between Tito Ortiz and Chuck Lidell.

“So what you’ve been handed, I could have brought 30 of these,” Dana White commented on the matter. “I brought one because it’s June 9, 2021. OK, this was a fight that just happened in June. It’s a Golden Boy Promotions fight that this d*ckhead put on, OK? There were nine fights and 18 fighters. The total purses paid for every fight was $36,500. Total. The average purse per fighter is $2,000 on a Golden Boy-De La Hoya card.

“He’s concerned about Alexander Volkanovski. OK, before we pay $1 in f*cking purse money, right, Volkanovski got paid more to wear his UFC Venum kit than Oscar De La Hoya paid the entire f*cking fight card. Do you understand what I’m saying? To walk out with the Venum fight kit on, he was paid more than Oscar paid the entire f*cking fight card. I could go on, but I think we all get the f*cking point: He’s a liar.”