UFC has confirmed heavyweight champion Francis Ngannou was no longer on their roster after negotiation fell apart. The Cameroonian was stripped of his title and is now a free agent. UFC president Dana White said that Ngannou was freed from his contract after rejecting an offer that would have made him the highest-paid heavyweight of all time.

With this, Ngannou is likely to pursue his dream: a boxing match against two-time heavyweight boxing world champion Tyson Fury. Both parties have planned to have an outing since last year.

Many combat sports fans are excited to see a clash between two heavyweight champions from different sports branches. Especially with the fact that Ngannou possesses an immense power house, having knocked out many UFC top contenders.

However, boxing veteran Tony Bellew has a different opinion. The 40-year-old believes that Ngannou wouldn’t stand a chance against any heavyweight boxers. He advised Ngannou to just stay in MMA.

“Terrible shame! He will not survive in a boxing ring against anyone of any note. He’s the best MMA heavyweight in the world right now and he needs to stay within his discipline.” Bellew wrote. 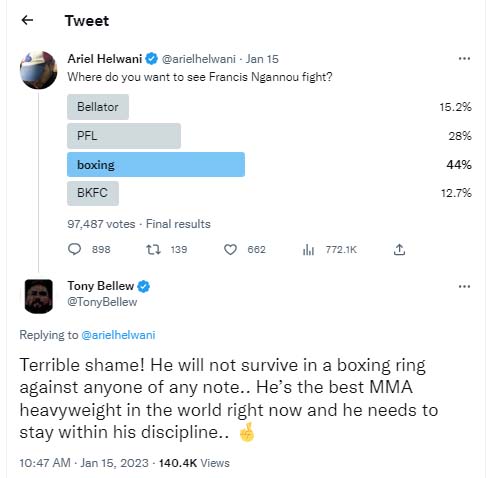 Boxing might be easier to learn compared to mixed martial arts in general. However, Bellew believes boxing is not just about punching. It requires quick head movements as well. It needs time to develop, especially against top-class boxers which require a lot of bobbing and weaving.

Last year, Ngannou’s coach Dewey Cooper proposed a mixed rules between boxing and MMA. Due to coming from different branches of combat sports, both camps decided to fight in a crossover or hybrid match. Cooper proposed the ideal ruleset according to himself.

“Boxing fight, MMA gloves, but 8 oz MMA gloves in a cage. Not to be an Octagon, has to be a cage — we meet halfway. … 8 oz MMA gloves like the puffy ones guys spar in and make it a boxing fight. But you can’t clinch.” Cooper explained during a talk with the Schmooze Podcast.