The Chinese streaming platform Tencent has restored the original ending of the movie “Fight Club”.

In the previous cut, the very last scene of the movie is cut, and a message is displayed that the police were able to find out the plans and arrest all the criminals involved.

At the end of the movie, the following statement was presented:

“Through the clues provided by Tyler, the police rapidly figured out the whole plan and arrested all criminals, successfully preventing the bomb from exploding.”

“After the trial, Tyler was sent to lunatic asylum receiving psychological treatment. He was discharged from the hospital in 2012.” 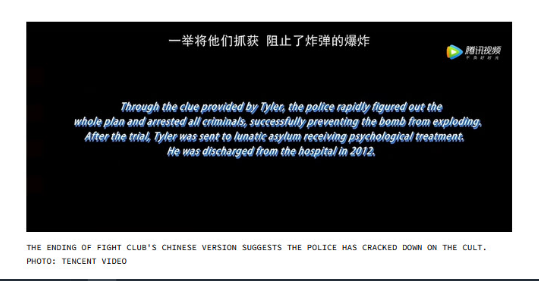 I didn’t realize the censored version of fight club in China was this funny as it plays out pic.twitter.com/ZdRXj6HxZs

In the original cut of the movie, the movie ends with an anti-establishment message as Edward Norton’s character “The Narrator” proceeds to bomb the basements of multiple buildings where credit records are held.

“If you erase the debt record, we all go back to zero,” the Narrator says, describing the plan in the movie. “It will create total chaos.”

The censorship generated a lot of backlash from viewers in China and all around the world as well. Meanwhile the author of the novel Fight Club upon which the movie is based supported the alteration saying it “aligned the ending almost exactly with the ending of the book”.

The movie’s director David Fincher has added to the discussion regarding the censorship of the last scene of the movie.

“A company licensed the film from New Regency to show it in China, with a boilerplate [contract]: ‘You have to understand cuts may be made for censorship purposes.’ No one said, ‘If we don’t like the ending, can we change it?’ So there’s now a discussion being had as to what ‘trims’ means.”

Fincher then added, “If you don’t like this story, why would you license this movie? It makes no sense to me when people go, ‘I think it would be good for our service if we had your title on it…we just want it to be a different movie.’ The fucking movie is 20 years old. It’s not like it had a reputation for being super cuddly.”

After the controversy, Tencent reversed back to the original cut of the movie.

China has been known to censor and even ban western movies from being streamed in the country.

Movies like Captain Phillips, The Dark Knight, V for Vendetta, and Mad Max: Fury Road have all been banned from China.