The way the biggest video distributer in jiu-jitsu treated the tragic passing of an active legend created a lot of unrest in the community.

Flograppling had gone with a live edition of their event WNO despite the fact that Leandro Lo was killed that night.

Media organization was put on blast by competitor Andrew Tackett on its own social media. 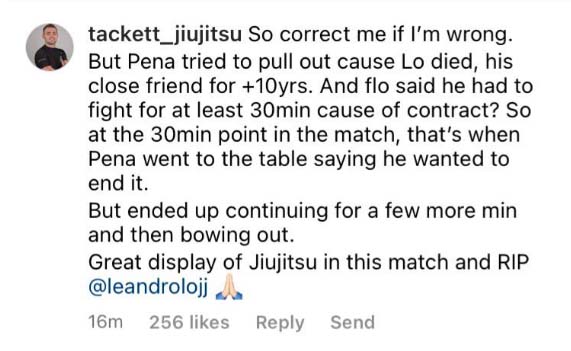 Felipe Pena shared his thoughts in the speech following the performance.

Flograppling was quick to censor their social media – something they commonly do when faced with negative feedback. To add insult to injury the feed kept referring to Lo’s passing – instead of his murder and attempted to distance themselves from what transpired in Brazil.

But following the backlash, Flograppling published their own ‘account of how the event’ was not cancelled.

“There have been some questions and controversy about what transpired pre-match on Sunday, so we want to clear things up.”

“Felipe Pena requested a 30 minute time limit match, Gordon Ryan said he would rather stick to the agreed upon terms and rules Or reschedule to a later date to keep the match no time limit. Gordon was never offered to do the match first on the card.”

“We offered Felipe a pay increase to keep the match ont he original date and original terms, plus a  guaranteed rematch, and he accepted. At no point did Flo or Gordon ‘force’ anyone to do anything. Felipe requested a rule change and Gordon said he wanted the agreed upon rules or to reschedule the match. Felipe agreed to the original terms after Flo offered him a significant pay increase. ”

Now this would be settled if not for the fact that both Pena and Ryan offered accounts saying that they were both open to rescheduling – but Flograppling wasn’t.

Ryan also went on to accuse Pena of using his friend’s death to change the ruleset which is frankly typical Ryan and not worth addressing.

Pena isn’t blaming Flo at the moment but he did share a video of his account of what transpired on Sunday.

“I have nothing to accuse none and to put more wood on the fire – I just want to get away from this everything and not post anything else and answer anything about this – this is not the most important thing. ”

Pena went on to direct Portuguese speaking fans to his video explaining the situation in his native language.

“Everything started when I received a call from Michael (Sears) at 9am telling me what happened with Leandro and that really messed me up and by 1 pm I decided to not fight anymore so I told my brother, I went down to the lobby to talk with Mike and someone else from flograppling and I said I’m mortified and if they can reschedule the match. ”

*Pena’s quotes have been edited for clarity. Full video is attached

“They suggest to put a time limit – do it 30 minutes or one hour match.”

“And I actually said could it be the first match of the event so I could just go there, you know, flight and pick up plane still the same day right after the match to go to Sao Paulo – for the ceremony in the cemetery. ..”

“If the match doesn’t happen now, it’s not gonna happen any more and everything.”

“Of course, for the event it would be really bad if I don’t fight, you know, but in the end it was my decision anyway and I regret this, I should not fight you know”

“For the second thing, I would never ask for more money to compete, that’s a complete lie. You know, money is not more important that time.”

“We already lost someone close, ”

Pena went on to clarify that this way of thinking is sick. He went on to explain Michael Sears had come into his room at 6pm and said Ryan had declined to put a time limit on the match.

“Because he saw I was not – didn’t want to fight,… I said yes, just said yes. And that’s it, like was my decision in the end, you know, but receive 20% of the purse more, of course, didn’t mean anything, ”