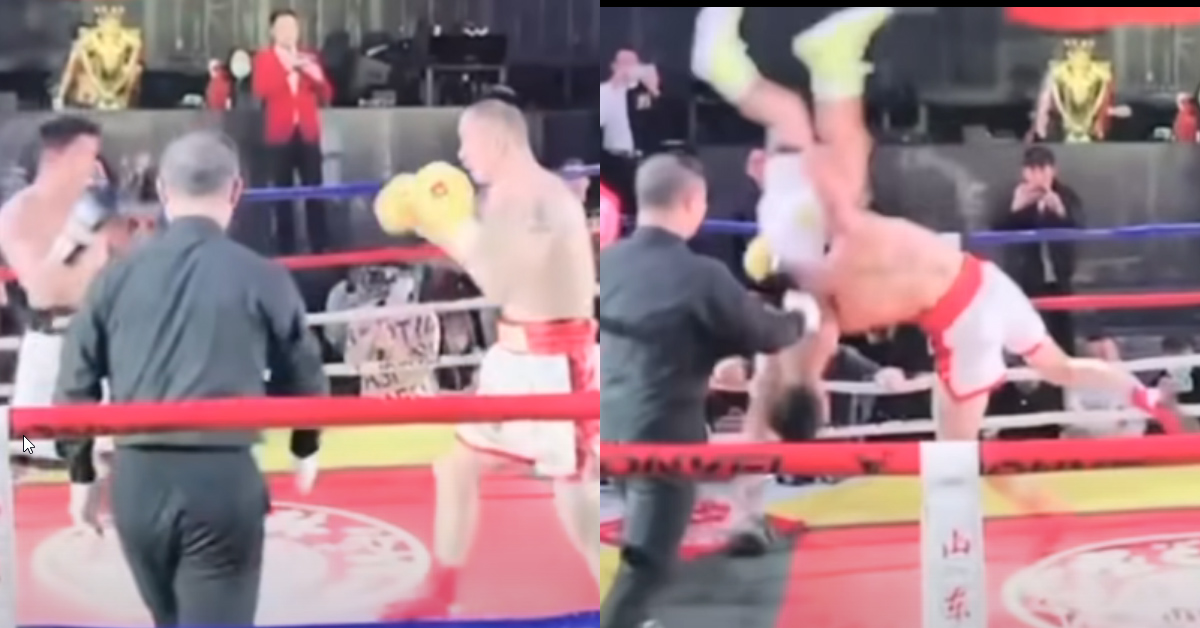 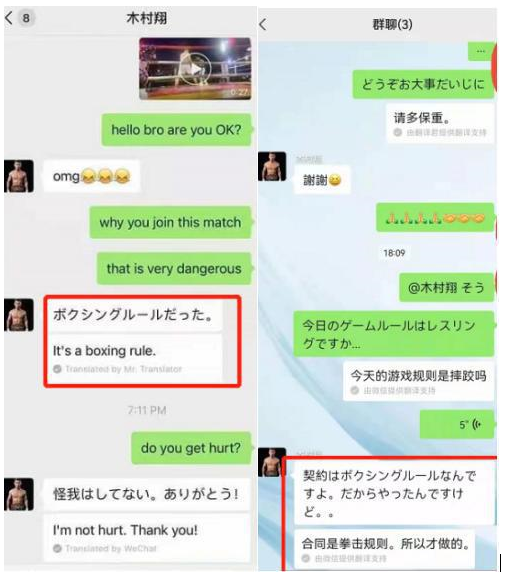 Leaks from weibo user:格斗迷-青春 confirmed that after the match, referee Zhang Xu explained he was verbally informed the match was “Chinese Kung Fu vs Japanese Boxing” and that wrestling moves were allowed.

He also revealed it wasn’t until half an hour before the start that he was verbally informed of the rules and was given no written details or terms, let alone clear restrictions on wrestling.

Sho Kimura also said that boxing rules were on the terms of the pre-fight contract, and that both men were wearing boxing gear when they entered the ring. His assistant said he was informed of the rule change after the fight was already over. 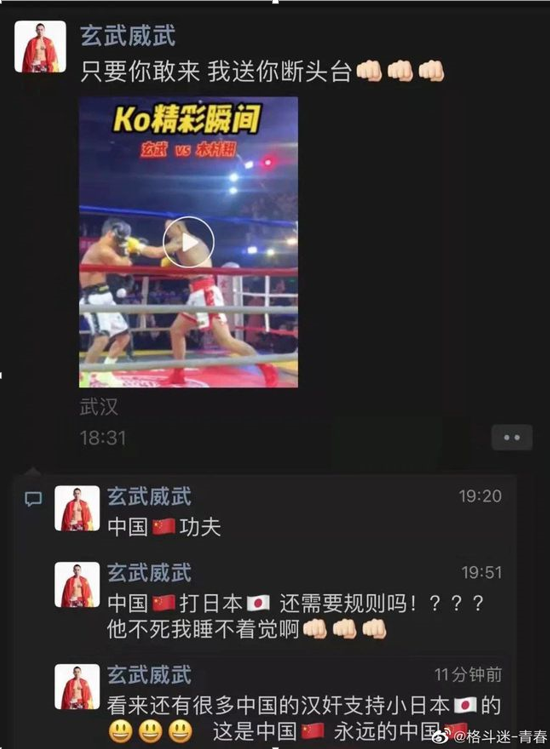 Xuan Wu wore the national flag to celebrate the victory. He put up the clip of the fight on his Wechat account and titled it “Chinese power.” In the following response to the criticism comments, Xuanwu clamored with tinge of nationalism.

“Do you still need rules for China to fight Japan? I can’t sleep if he doesn’t die! It seems that there are still many Chinese traitors supporting Japs. This is China, forever China.” 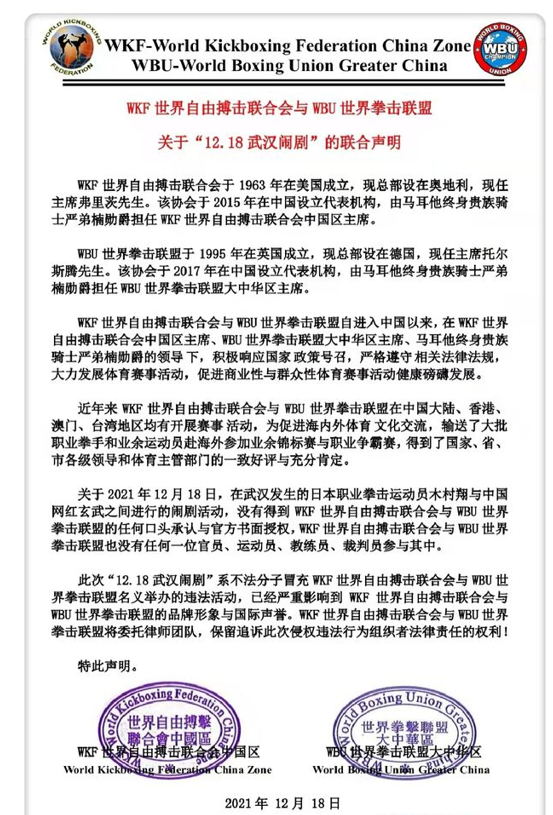 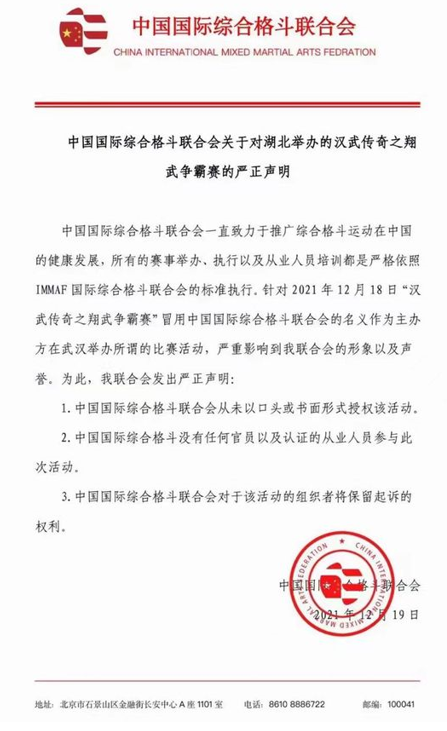 Event was co-hosted by the World Boxing Union (WBU), World Kickboxing Federation China Zone  and China’s International Mixed Martial Arts Federation (CIMMF). Following the controversy surrounding the fight, all three organizations have released statements denying their involvement and blaming organizers of the event, calling the whole thing “a farce”. In addition to this these organizations reserved the right to hold the organizers legally responsible.

A number of fighters from either of these countries is outraged by what’s transpired.

Hiroto Kyoguchi and Kosei Tanaka tweeted to express their displeasure over the matter, believing that Xuan Wu had fouled and hurt Kimura.

Kosei Tanaka can be quoted saying: ”Got out-weighted about 20 kilograms. The organizer Completely ignored the foul play…… Quite an annoying video. Please come back soon.”

Hiroto Kyoguchi can be quoted saying: “I watched the video of Sho Kimura’s exhibition fight in China. Tripping opponents with outstretched legs aside, the wrestling moves and dropping on mat have gone too far. It’s not surprising that will cause some serious damage.”

Chinese MMA fighter @费翔MMA called Xuan Wu‘s actions “outrageous” and a serious violation of the spirit of sport, and called for a boycott of such fighters in the ring, 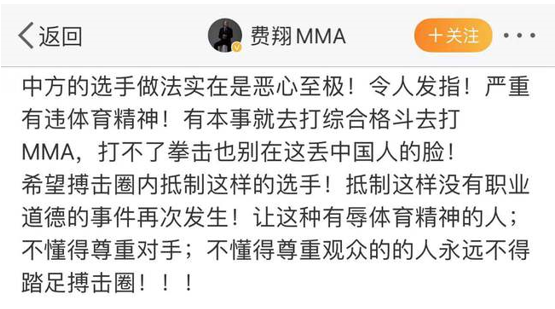 His response to the incident was posted simultaneously on Weibo and Twitter. He said:
“There are good people and bad people in any country in the world. I hope everyone will not hate the Chinese in this matter.”