Controversial MMA athlete Dillon Danis got hilariously trolled by combat sports fans after a video of his training session was posted online.

Fans made fun of his techniques and are sure that he won’t stand a chance against KSI.

Betting odds are certainly not in his favor. Danis opened as an underdog and the situation has only gotten worse since. 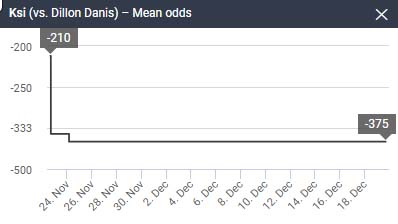 Dillon Danis has become quite a mainstream figure among combat sports fans despite the fact he hasn’t professionally competed since 2019, especially those in the younger age.

This is all thanks to his involvement with several social media celebrities including Jake Paul, Logan Paul and KSI.

He also trolled and insulted most of famous MMA athletes you can think of on social media.

In MMA, Danis is most known to be Conor McGregor’s former teammate and sparring partner. He made headlines mostly during the build up for Khabib Nurmagomedov main event at UFC 229 back in 2018. He was also the one Khabib attacked after the McGregor submission finish.

Danis’ irritating behavior has fans yearning to see him get beaten. Dillon Danis is set to face a famous UK Youtuber called ‘KSI’, who had several successful exhibition boxing matches.

The pair will exchange blows in January of next year at the MF & DAZN X Series 004 event. The event will be held in London, England at the OVO Arena.

Recently, Dillon Danis posted a video of his training session on his Twitter account. In the 40-second montage clip, Danis can be seen training hard in preparation to exchange blows with KSI. He also put a background voice saying how determined he is.

But, fans were quick to jump in the comment section to roast him.

“still gonna get ur a** beat.” One fan wrote. Another wrote, “Bro u almost got rocked ur gonna lose.”

“why you sparring cardiobkickboxers” – another onlooker asked.