Fallon Fox was the first openly trans MMA fighter. She competed between 2012-2014 and outed herself some time in 2013.  Fox is mostly criticized for not disclosing her biological status prior to several bouts so that her opponents could make an informed choice.

Undefeated in her first three bouts, she faced current UFC bantamweight fighter, Ashlee Evans-Smith in her fourth. Evans-Smith eventually gave Fox her first and only defeat in the cage.

This was a Champion Fighting Alliance 12 featherweight title fight back in 2013.

Evans-Smith apparently figured out Fox’s strategy by the beginning of the second round. She dominated the second round both on the feet and on the ground, rocking Fox multiple times and controlling her from top positions.

Evans-Smith eventually got into the mount position late in the round and landed several unanswered ground and pounds that prompted the referee to stop the fight. And this time, for real.

Ashlee Evans-Smith later shared her thoughts about her opponent:

Fox later slammed Evans-Smith for the statement, saying that a claim of her having an unfair advantages is baseless.

“The fighter WHO BEAT ME says I have UNFAIR ADVANTAGES. Her interview was hard to watch. She started out by saying that I didn’t have a strength advantage or a cardio advantage, which is exactly what I’ve been saying this whole time. Then she went on to say that I hit hard. Damn right I hit hard! I’m a MMA fighter and that’s what we do!”

And to this date Fox maintains this.

Just today Fox gloated over the news that USADA suspended Ashlee Evans-Smith for 14 months for PED use. 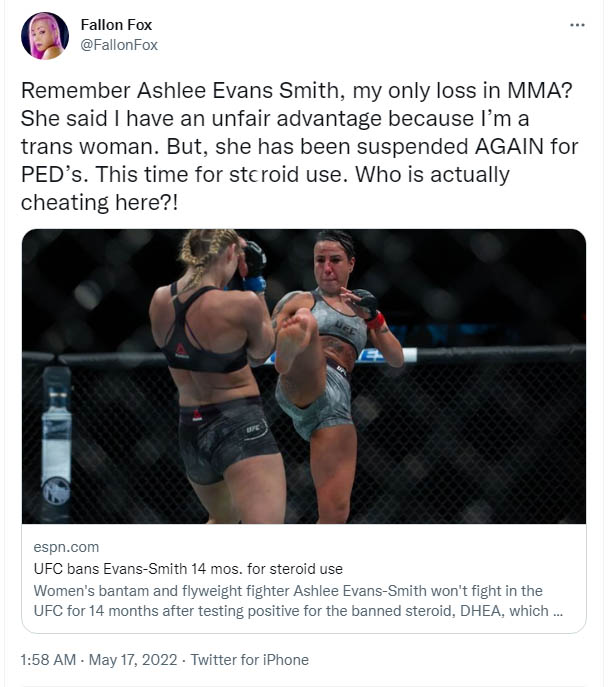 Back in February of 2015, Evans-Smith was suspended for a diuretic used to also treat high blood pressure and fluid prevention,  She was subsequently suspended for 9 months and fined. 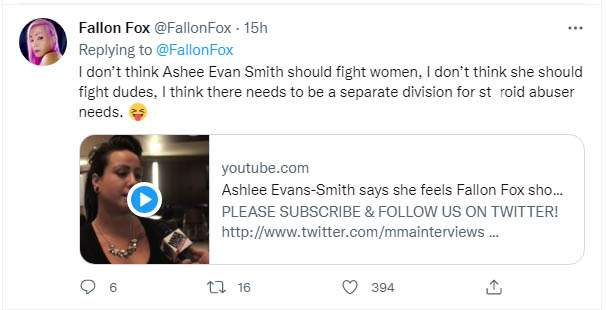