UFC analyst and pundit Daniel Cormier was once again the target of Dominick Cruz’s latest attack.

This weekend, Cruz will compete against Marlon Vera in the main event of UFC San Diego. Cruz wants to challenge Marlon Vera in order to get one step closer to the the bantamweight championship, but Vera is one of the most lethal strikers in the category.

Cruz previously expressed his disdain of Cormier’s commentary due to lack of research:

“When it comes to ‘DC,’ I usually mute it. I love DC, he’s my friend, but to me, from my experience, he doesn’t do the homework. He wants to get in and out, get the job done, make his money, and I think he cares about us but it’s just different.”

“He doesn’t do the preparation from my experience. He might now, I’m hoping he watches some film this time on me so he knows what I’m doing and why I’m doing it, but I’m not gonna hold my breath on that, that’s for sure.”

Cormier and Cruz eventually sat together and resolved their disagreements in a video as a result of this.

Cruz was this time questioned about whether or not Cormier now watches more movies.

“He’s good, I call him the “Golden Fluffer”. Whatever you want to hear, he will say it and he will make you love him. That’s hit gift, gift of gab.”

Cormier naturally responded to the comments:

“I just wish everyone would just stop twisting Dominic words man. It’s frustrating, we’re friends I know you heard him tell me he loves me yesterday at the end of our interview. No one could fake that” 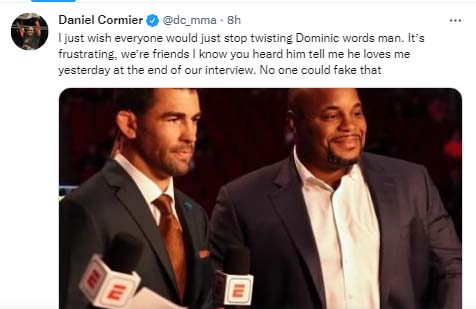 But if you’ve seen the video it’s hard to argue that Cruz did in fact once again shade Cormier’s ability to be good at his job.