Cormier was officially confirmed as part of the commentary team for UFC 280 and pretty much as soon as confirmation came everyone started accusing him of bias – this is in no short part because he’s been heavily biased in the past.

Cormier addressed the many claims of prejudice during an appearance on ESPN’s “DC & RC,” saying:

“I’m not gonna crap on my friend to make people feel better. I believe and I am confident that he can win the fight and become the champion, but I do recognize that this is by far the most difficult challenge that Islam Makhachev has ever had.”

But it did cast a shadow over Daniel Cormier’s commentary. So was Cormier influenced by the criticism? Judge for yourself.

A friend of the Dagestani camp. filmmaker Will Harris bemoaned the fact that Cormier had to tune himself down recently on social media. 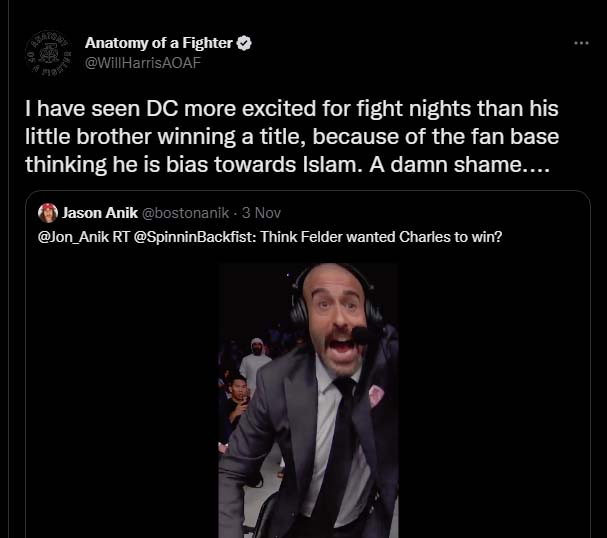 In a tweet that has since been deleted Harris begrudged the fans for Cormier having to tone down his reaction to the victory. Mind you, Harris missed the mark on this one. The issue isn’t celebrating a finish – it’s all about biased interpretation of ambiguous situations.

Cormier knows all too much about this, in fact he even had to defuse a situation with a competitor that called him out on it – in the octagon.