UFC middleweight contender Darren Till fired back at Israel Adesanya after Adesanya criticized Till climbing the cage along with main event winner Tom Aspinall. Adesanya had watched the card and reacted to it on his youtube.

Darren Till was present at the event to support the UK locals including event headliner Tom Aspinall. When Aspinall submitted Alexander Volkov in the first round, he celebrated it by jumping on the fence. Darren Till did the same thing – as if he had won the fight.

As usual, Israel Adesanya was streaming the event at his home. ‘The Last Stylebender’ recorded in a reaction video. Adesanya didn’t appreciate it when he saw Till jump on top of the octagon fence. He immediately shouted “Sit the f*ck down [Till] it’s not your moment. Get the f*ck off.”

Someone behind the camera also roasted Darren Till by saying: “He’s not won in a while, let him enjoy it.”

This made the whole room chuckle.

They cooked the hell out of Till on Izzy’s vlog ?? pic.twitter.com/OSjewYeUww

Darren Till was triggered by Adesanya’s comment. The 29-year-old Liverpudlian took to his Instagram account to hit back on Adesanya and tagged his Instagram account. He explained the reason for him doing that was because Tom Aspinall himself asked him to do so. Till also implied that Adesanya has been using addictive substances. 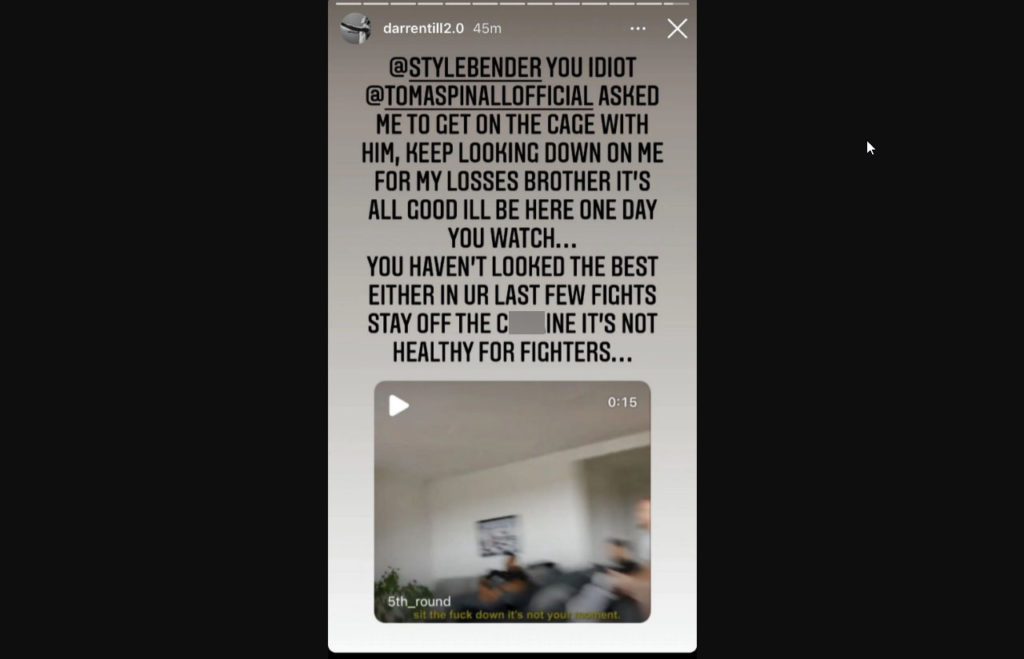 Darren Till isn’t doing so well as of late. After losing the last two in the welterweight division, he returned to middleweight only to go 2-1. Even so, Adesanya still wants the match up. He also claimed that Till was always avoiding him.

“I’ve tried to set it up so many times, but Darren Till hasn’t really stepped up. And he’s fumbled the bag a few times. Don’t doubt him just yet. It might be something mental he has to deal with, because I don’t think it’s something physical. He has got the physical attributes and the gifts.” Adesanya told Sky Sports.

Darren Till  revealed he asked Tom Aspinall to call out Cyril Gane.

“I actually whispered in his ear and said, ‘Ciryl Gane is there. Get that mic and run over to Ciryl Gane.’ He [Aspinall] is like, ‘No no, Tai Tuivasa, then Ciryl.’ I just think he knows his path. He knows everything what he wants to do. He’s doing it his way, he’s doing it the best way, and he’s doing it the genuine way. And I’m just honestly so proud of him.” Till told BT Sport