Dana White added fuel to the fire of one of UFC’s biggest rivalries. Nurmagomedov retired at the behest of his mother – following the passing of his father Abdulmanap Nurmagomedov. In retirement Nurmagomedov is looking at Conor McGregor’s business successes and looking to mirror them. For Khabib this meant purchasing Eagle FC and taking a more active role when coaching his friends.

Khabib and Tony Ferguson were booked to face each other on four separate occasion with the event falling apart on each occasion.

Ferguson is in the downswing of his career – he just suffered the first knock out loss of his career. In several previous outings Ferguson was compromised via jiu jitsu and would not succumb to submissions.

Yet Ferguson still keeps chasing that illusive Khabib match up that hunted him when he was at his peak. Considering Nurmagomedov is retired – Ferguson offered up the two face each other as coaches on the reality show The Ultimate Fighter.

“I believe that when his dad [Khabib’s] said that we were supposed to compete, I believe that. Regardless, I would love to be able to coach against him in The Ultimate Fighter,” Ferguson said on The MMA Hour.

Khabib responded to Ferguson and agreed he was open to coaching against Ferguson on the long-running UFC reality show, The Ultimate Fighter. But he also proposed an alternative in case the UFC brass wasn’t on board – he would instead facilitate the coaching challenge in his own promotion – Eagle FC.

“Tony I like the idea about TUF, call your bosses and let them make an offer, but if they don’t have ideas, I myself will offer you a deal on the @EagleFightClub platform, we doing some business here you know.”

Previously, Khabib’s manager Ali Abdelaziz floated the idea of a grappling match between Khabib and Ferguson at Eagle FC but Khabib was quick to shut down these rumors.

However, Tony Ferguson wasn’t enthusiastic about the proposal. He replied to Khabib Nurmagomedov, reminding him that he has an exclusive contract with the UFC as an independent contractor. 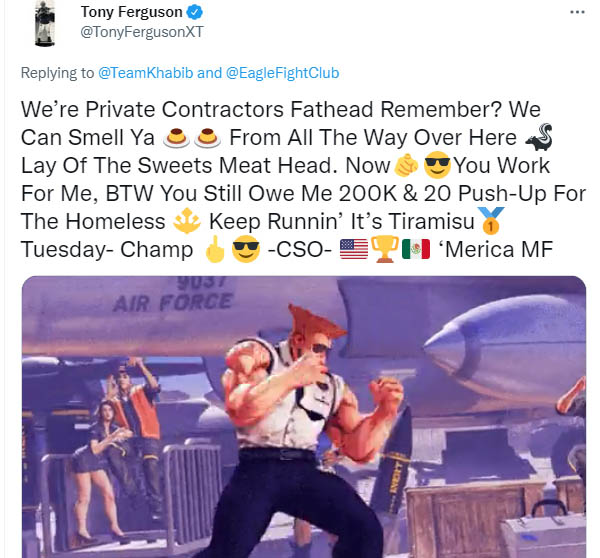 But contrary to expectations, UFC honcho Dana White might be on board with the two of them coaching even if they don’t get to MMA fight each other at the end of the reality series.

“So you’re telling me, you guys as fans, media, whatever it might be, like the idea of two guys possibly coaching that wouldn’t fight each other?” White responded Tuesday when asked about Ferguson’s proposal on The Spinnin Backfist MMA Show.

“I’ll consider it. Congratulations. … I will absolutely entertain that idea.”

While White is ever the businessman not shutting the doors on lucrative opportunities this match up is unlikely to materialize. Current season of TUF is being coached by Amanda Nunes and Julianna Pena and the UFC has struggled to market it. As is, the future of the reality series that once rescued the UFC is hanging in the balance. It’s possible that Khabib and Tony Ferguson could infuse new passion about the show – but at the end of the day UFC has more lucrative opportunities to sign up new blood considering that Dana White’s Contender Series and the new ‘Road to UFC’ Grand prix.