Dana White has been enjoying the lavish lifestyle for a number of years and especially ever since Endeavor acquired the UFC. Longtime UFC president has been largely absent from the last several UFC cards due to ‘personal issues’ and has instead indulged in spending sprees.

White has also gifted Kyle Foregard of the Nelk Boys $250,000 in cash. For his birthday.

This is particularly jarring considering how adamant White has been as to not increase UFC pay and to try and strong arm the athletes on his roster into never becoming free agents.

This strategy is only backfiring as of late with Nate Diaz and Francis Ngannou set to become the first two – with Diaz wanting to part ways with the promotion and Ngannou simply seeking a fair deal.

Ngannou reportedly received only $600,000 for his title defense against Cyril Gane. To put things into perspective, PFL champion Kayla Harrison received over $1 million for her last bout – in which she faced a mediocre opponent. Another PFL competitor, Anthony Pettis received $750,000 paycheck despite losing last 3 out of 4 bouts. 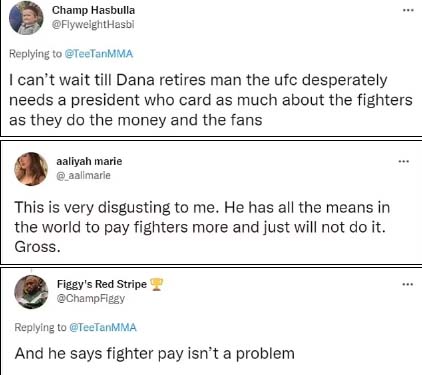 “And he says fighter pay isn’t a problem”

Some fans speculated that the Nelk boys were promoting the UFC. Nelk boys were famously embroiled in a UFC scandal when they allegedly leaked information about Colby Covington’s whereabouts so that Masvidal could stage that infamous incident.

In addition to Colby, Masvidal and White himself, the Nelk boys also hosted the following athletes on their program: Kamaru Usman, Sean O’Malley and more.

More recently Nelk’s Full send reporter was slapped by Nate Diaz for allegedly talking smack about one of his friends on social media.