In October 2014, Damir Ismagulov made his professional MMA debut. Before losing to Ramazan Esenbaev by unanimous decision, he won his previous five bouts. Ismagulov   then remained unbeaten for the next seven years.

Ismagulov established a reputation for himself with the M-1 Challenge before entering the UFC. The Kazakhstani boxer defeated Maxim Divnich to win the M-1 lightweight championship, which he defended until he left the organization.

Ismagulov wasn’t on everyone’s radar when he signed with the UFC, but people knew about his potential at the time. Damir defeated Alex Gorges in his professional debut in 2018. After that, he garnered recognition by defeating Joel Alvarez and Thiago Moises.

Ismagulov's body jab.
Set ups the over hand right, the level changes itself draw Alvarez counters, Ismagulov constant feints froze Alvarez many times, changes rhythm, Shift behind it, also Damir had such a good eye to see when the Knee or left hook counter was coming & step out pic.twitter.com/EIPJZ0UNbb

Ismagulov didn’t compete again for almost two years after defeating Moises. When he came back in 2021, he beat Rafael Alves through a unanimous decision. A year later, Damir defeated Guram Kutateldze in a split decision.

Did you HEAR that 😳

Ismagulov put him DOWN #UFCVegas27 pic.twitter.com/EIz7jB4Gkh

The 31-year-old, who seemed set to compete for the 155-pound title, has made the decision to go to a new phase of his life. Ismagulov posted the following on Instagram as the official statement:

“Unfortunately, due to circumstances and health problems, I am forced to end my sports career. Thanks to all those who were with me regardless of the outcome in the battles, who were sincerely sick and worried. It was an interesting journey, a moment to remember. Gave everyone a hug.” 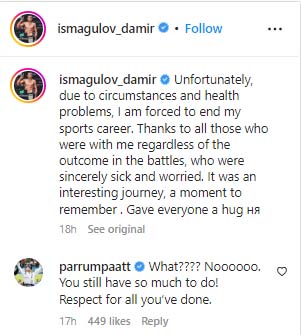 Unfortunately, the retired lightweight will forever be remembered as another what-if in MMA history.

Despite having the potential to become s UFC world champion, health always comes first. He has a 24-2 overall record as of his retirement.