UFC icon has sicced his fans at Lobov on Twitter, calling him a “rat” in a number of posts. Lobov took particular exception to McGregor calling him a rat because he feels it characterized him inaccurately.

It all culminated with McGregor composing a catchy tune ‘Artem is a rat’ which made a lasting impression in the MMA fandom. 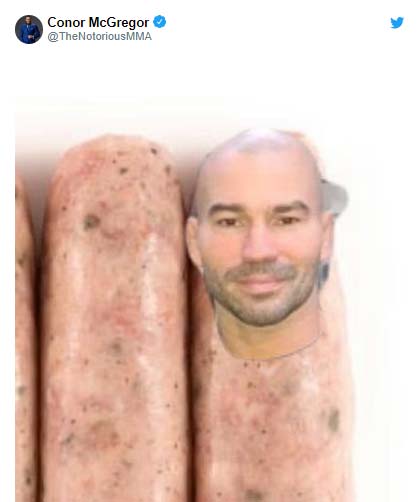 In addition to this, McGregor also called Lobov a turncoat, a little blouse and a sausage. The court also heard that a picture of Mr Lobov superimposed on a packet of raw sausages was also posted on Mr McGregor’s Twitter account.

Lobov made an application for orders requiring McGregor to take down allegedly defamatory Twitter posts..

On Friday, Mr. Justice Garrett Simon said that Lobov’s case lacked context. He stated that McGregor’s use of the word “rat” was just one of many derogatory phrases McGregor used to describe his former friend.

The court came to the conclusion that McGregor’s tweets should be seen as “a rant, a tirade of vulgar abuse” by an Mixed martial artists with a reputation for “trash talking”. The judge was not persuaded that Lobov was the target of any defamatory allegations.

He said that McGregor was entitled to his costs and that he will deal with that issue on January 11.

“You are making a holy show of yourself. Peel it back day by day, if you can even. That’s coming from the “old friend, woulda done anything for you” in me mate. God bless”

Conor McGregor was just dropped from UFC rankings for the first time in 8 years. McGregor has been absent for over a year and is dedicated to recovering from injuries sustained in Dustin Poirier match in July of 2021.

He is still absent from the USADA pool meaning any potential return is likely several months away.