Many question McGregor’s will to return considering it’s very hard to recover from such a gruesome injury in addition to questioning his motives considering he’s financially set for life thanks to lucrative sale of Proper 12 brand.

Following surgery to treat his leg injury, McGregor has shown a significant increase in size and prompted many to question his PED use. He’s not been tested by USADA in a year as he continues his recuperation and rehabilitation.

He is anticipated to make his long-awaited Octagon comeback sometime in 2023.

McGregor stated his plans to make that comeback at the welterweight limit coming Wednesday night on his official Twitter account. Conor McGregor replied to a Twitter fan who asked whether he would be fighting at welterweight next with the words “Definitely.”

In one of his recent bouts, which took place in January 2020 at the welterweight limit, McGregor defeated Donald Cerrone in a decisive 40-second knockout victory. The Denver native was put down by the now-retired future Hall of Fame member in the first round with a high kick and punches.

Over the course of his professional career, McGregor has gone 2-1 at the welterweight limit. In 2016, he suffered his first Octagon loss to Nate Diaz at 170 pounds. That same month, he overcame that setback by winning by a majority decision.

When asked about particular opponents for a welterweight fight, McGregor remained evasive and said that his goal was to stage “clinics” at 170 pounds.

Conor McGregor said on Twitter, “I’m excited to put on clinics. They’ve seen half a page of my dossier.”

I’m excited to put on clinics. They’ve seen half a page of my dossier. https://t.co/6BQQiVpSCv

McGregor also took time to gloat over the dreadful financial report of ONE FC. 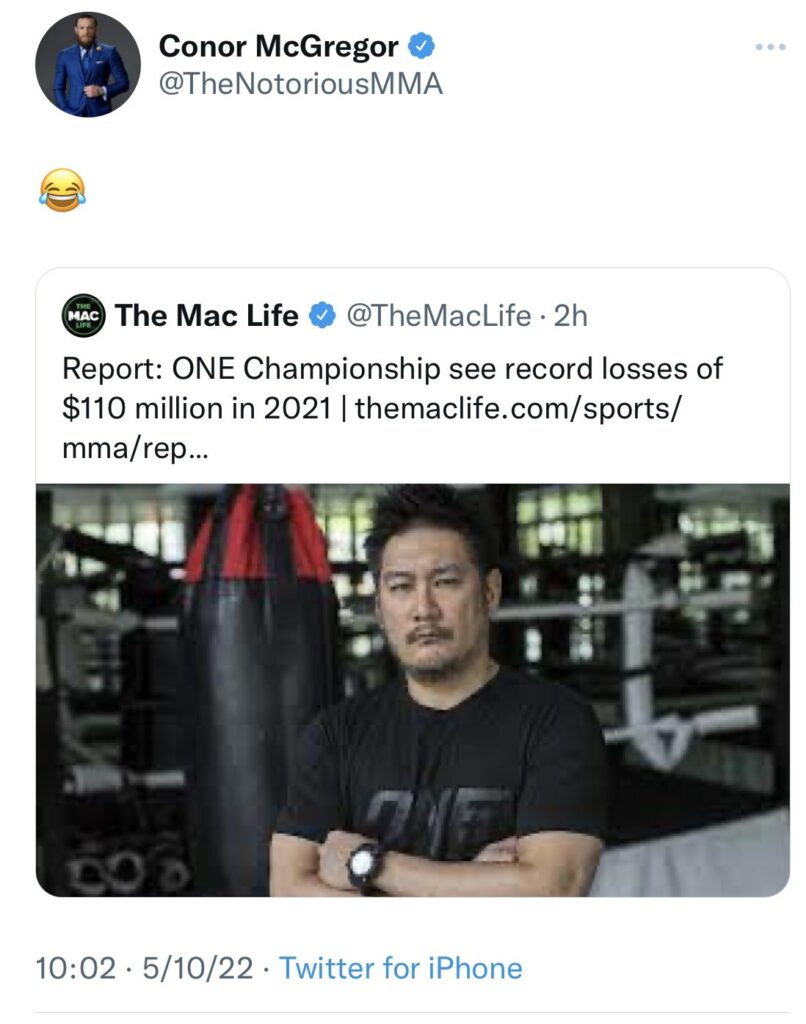 The animosity was reportedly caused by ONE FC CEO saying McGregor’s values aren’t compatible with ONE FC and how he wouldn’t sign McGregor even if he was a free agent.

“If Conor McGregor was a free agent, ONE Championship would not try to sign him. We don’t want somebody to swear at people, throw water bottles, disrespect people, call out people’s wives and children, and – in my opinion – other distasteful stuff that is not representative of true martial arts.”

McGregor also snuck one over on his Brazilian colleagues and claimed: