Conor McGregor has said that his most recent outburst at Michael Bisping was just a show of his acting abilities.

McGregor will co-star with Jake Gyllenhaal in the forthcoming Road House adaptation, which will air on Amazon Prime sometime in 2023. He just had his first taste of legitimate Hollywood acting. He was previously booked to make his movie debut but dropped out in the fall out of his loss to Nate Diaz.

McGregor seems to be bitten by the acting bug after spending “twelve hour days” on the set. But in order to avoid misleading everyone with his strategy, he must learn to manage his skills.

After making headlines for attacking Bisping in a profanity-filled Twitter Voice recording, McGregor responded with a far more subdued remark.

“Hey Mike, it’s Conor here. Just getting on about that video, the last one I saw, I saw you didn’t understand that I was simply acting … and I thought you would have known. Brother, all love my man. God bless the show, God bless the fam, and God bless my man.”

That sort of background information does help to understand McGregor’s exaggerated response to a little argument the two had about acting on Twitter.

McGregor said in the deleted clip.

“Security, you little sausage of a thing. I’ll have security set you up. Where do you stay when you’re in Vegas again, pal? Little Apex fanny pad.”

“Keep my name out of your f**king mouth in any type of threatening behavior, or I’ll walk through your front door. Yup, Laguna [site of Bisping’s home in California], you little dope. Yup the Mancs, yeah! Go back where you belong you little clown, you little sprinter.”

The first person to try to diffuse the issue after that remark was Bisping. He clarified on his Believe You Me podcast that McGregor was joking during the incident.

“If you watched the show, we were having a laugh. It’s a f****** joke, obviously, there was no threats on my end whatsoever. But he kind of flipped a lid, didn’t he? He lost his mind. Anyway, Conor, relax buddy, Jesus g****** Christ. There you go.”

Considering the latest round of PED accusations and Bisping’s outspoken nature it’s hard to imagine this beef is over. 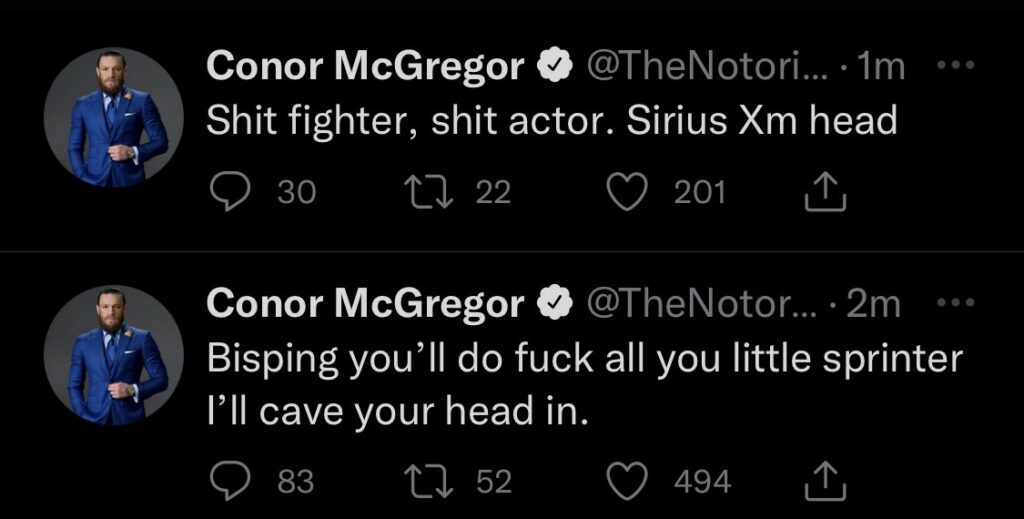 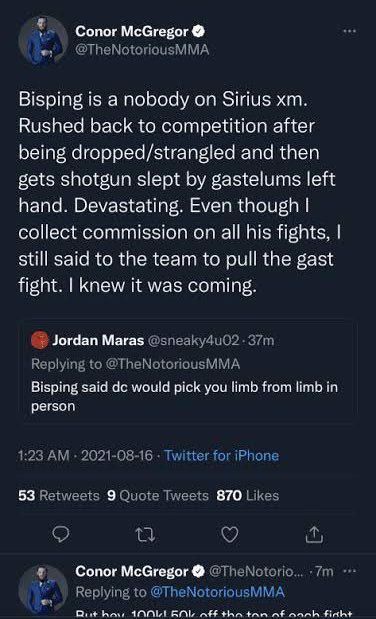 McGregor has been absent from the USADA pool for a year prompting many fellow UFC athletes to assume he’s taking PEDs to improve chances of making a successful comeback after a catastrophic leg injury.

Meanwhile Michael Bisping commented on the case of boxer who recently failed his voluntary PED test and replied to fans on twitter saying: