Conor McGregor might be the biggest UFC superstar but he’s not immune to criticism. While there’s plenty of reasons to criticize the troubled Irish sports star, this one might be fairly unreasonable.

Back in 2018, the Irishman made a trip to Moscow to watch the World Cup final between France against Croatia at the Luzhniki stadium, where he was invited to meet the most powerful man in Russia. The encounter was captured for McGregor’s YouTube channel. 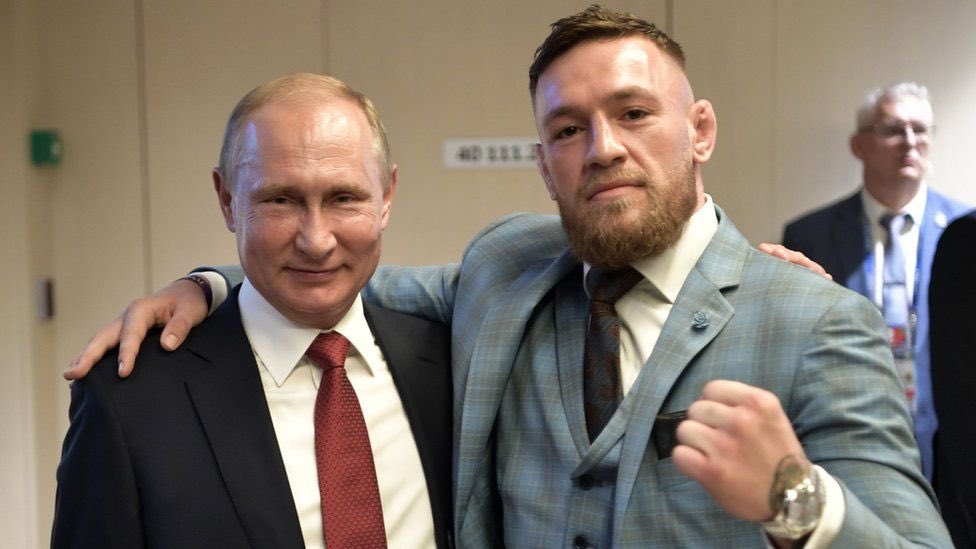 The meeting between the two started warm with both gentlemen were expressing fondness and respect towards each other during a brief conversation.

McGregor then got carried away – when it was time for them to take a photo, McGregor put his arm on Putin’s shoulder, prompting a big warning from Putin’s security team.

The former UFC two-division world champion then took another picture with the president, but this time, with a much more tense gesture and facial expression.

A handshake and a pat did ensue before McGregor went on his way. ‘The Notorious’ then posted on Instagram about meeting Putin, praising the 69-year old as “one of the greatest leaders of our time”.

“Today I was invited to the World Cup final as a guest of Russian President Vladimir Putin,” McGregor wrote. “This man is one of the greatest leaders of our time and I was honored to attend such a landmark event alongside him. Today was an honor for me Mr. Putin. Thank you and congratulations on an amazing World Cup. Россия вперёд!”

While this transpired back in 2018, members of media were quick to criticize it in light of recent action taken by Russian president Vladimir Putin.

“Remember when UFC star Conor McGregor met with Putin at the 2018 World Cup final in Moscow? He called Putin “one of the greatest leaders of our time?”. This is how sportswashing is used to normalize dictators like Putin.” wrote Bloody Eblow’s Karim Zidan. Zidan was quickly flooded by replies and mentions.

He replied to the backlash saying:
“The emphatic responses from McGregor fanboys defending Putin & McGregor’s shady behaviour only emphasizes my point about how effective sportswashing tactics are as a form of propaganda. Now consider how much more effective it is when major institutions like IOC & FIFA do it.”

The emphatic responses from McGregor fanboys defending Putin & McGregor’s shady behaviour only emphasizes my point about how effective sportswashing tactics are as a form of propaganda.

Now consider how much more effective it is when major institutions like IOC & FIFA do it. https://t.co/xLooqBMMQA

The meeting was only a few months before McGregor made a comeback to the octagon against Russia’s UFC champion Khabib ‘the Eagle’ Nurmagomedov. As we all know, at UFC 229  the Irishman got submitted with a neck crank by Nurmagomedov who proceeded to lash out at McGregor’s team over how he was treated during the promotion of the fight.

Watch the meeting between McGregor and Putin below.