A notorious mixed martial arts manager Ali Abdelaziz has tried to shame Francis Ngannou’s former coach Fernand Lopez for blocking one of his clients from joining the UFC.

Fernand Lopez is head of MMA factory and Sports Director of ARES FC. ARES FC champion Slim Trabelsi tried to join UFC earlier this week to be a late day replacement – but was faced with a draconic break fee when he tried to get out of his contract with Ares FC.

Trabelsi is Tunisian and was in France illegally for the last 6 years which has limited his travel opportunities and basically shoe horned him into Lopez’ team and his promotion. Trabelsi gave an interview recently and argued he was coerced into signing this contract due to his life circumstances.

Further he alleges Lopez had paid him just 4000 euros for a title bout when the going rate is 10,000 just because he knew Trabelsi had no other opportunities. Trabelsi made these allegations and showed a screenshot of his conversation with Lopez (presumably) in a recent interview.

Abdelaziz called out Lopez for his gesture recently: 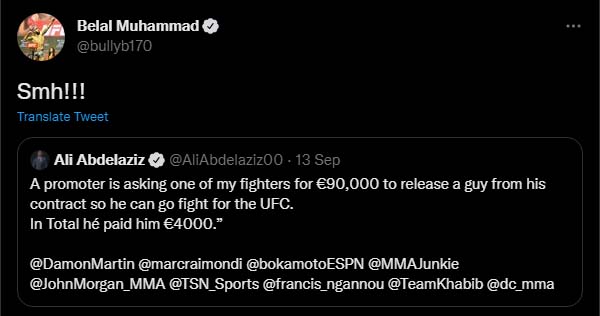 This is an interesting take from someone who is a close collaborator of the UFC and knows how contracts work.

Back in 2015 Abdelaziz was made to leave his position as a matchmaker at WSOF (now rebranded to PFL) due to the fact he was also managing a good number of athletes on the roster.

“We all sat down as a team with (WSOF President Ray Sefo) and Ali, and we made a decision together that it was appropriate to part ways amicably,” WSOF CEO Silva told Steven Marrocco

.”Ali’s got a business to run. He’s going to go back into that business 100 percent of the time and grow that business. We wish him well.”

Abdel-Aziz’s role as matchmaker was brought up in a lawsuit against WSOF, which was filed by their business partner WSOF Asia. The suit uncovered what appeared to be significant internal struggle for the promotion.

This story also goes deeper. Abdelaziz had a stand in who allegedly pretended to manage some of his athletes while he was serving as a matchmaker for WSOF – one Kyle Stoltz. If the name rings a bell that’s probably because he was recently arrested when the FBI performed a sting operation designed to catch predators.

Abdelaziz also used a similar strategy to get his own clients. As per Mike Russell, Aguilar was benched by Abdelaziz who claimed he couldn’t find her fights as WSOF matchmaker after she declined an offer to sign with Dominance MMA (his management company).

Huge possibility this was Ali posting this to "prove" he didn't manage Justin when Stoltz was still VP of Dominance MMA and he was at WSOF. Around then Ali was asked to write his job description for the WSOF board. He basically admitted a crime. Negotiating with himself. pic.twitter.com/3iaVqSNrzQ

While we sympathize with Trabelsi it’s important to point out that this kind of conflict of interest is exactly how Ali Abdelaziz got ahead in the MMA business – and some suspect still does to day.

Even though Ali Abdelaziz is a controversial character, his argument shouldn’t be disregarded. Managerial abuses in the world of MMA are huge not to mention that Promotions often have abusive contracts. For example, Nate Diaz just finished out his contract with UFC that was signed before 2016. Diaz had signed the contract prior to UFC class action lawsuit which forced the UFC to introduce the concept of sunsetting – ie Diaz’ contract could’ve gotten auto extended indefinitely without any repercussions to UFC.

If Trabelsi is to be believed, Lopez has said that he would release athletes if the UFC came calling in an effort to entice talent to his company.

Fast forward to earlier today when a suspicious rumor surfaced. The rumor can be traced back to the ‘belt news’ twitter. A lukewarm account with no website attached to it and a suspected connection to Dominance MMA.

Stay tuned, this is the MMA Factory Coach, Manager and Ares FC Promoter Fernand Lopez real name Owonyebe Eloundou, all charges are getting translated right now and will be released by Monday.

He has a massive criminal record in France and Italy. pic.twitter.com/PKES9NR9io

The account displays a picture of Fernand Lopez along with his full name as well as allegations of a criminal history.

While this is certainly interesting this wouldn’t be the first time someone in MMA had a criminal history. And just for the sake of argument let’s look at Abdelaziz.

Here is his custody report and charge sheet: the crimes @AliAbdelaziz00 committed included forgery, criminal impersonation, conspiracy to commit forgery, accessory to forgery, unauthorized use of a credit card and theft. pic.twitter.com/6olbyGDg2s

And this is without even mentioning his ties to 9/11 or his travel ban.

“The WSOF lawsuit detail how Ali hid his affiliations and bet on his fighters. An ex-WSOF exec told me execs joked “Always bet on fighters sponsored by Autoshopper (who Ali secretly worked for) to win.”

Or matchmakers betting on fights he matches/presents to ACs as fair/even. The WSOF lawsuit detail how Ali hid his affiliations and bet on his fighters. An ex-WSOF exec told me execs joked "Always bet on fighters sponsored by Autoshopper (who Ali secretly worked for) to win."