There seems to be a new trend in the UFC and it more or less started thanks to Tai Tuivasa and lucrative beer company sponsorships.

Tai Tuivasa recently bragged that nobody used to drink beers right after a bout and nowadays it seems like everyone does.

This prompted TUF1 alumni Forrest Griffin to explain Tuivasa is definitely not the one that thought of the idea – just the first to not be actually stopped when executing it.

Forrest Griffin explained:
“I did after the TUF final. Somebody find the tape. The commission came over and physically stopped me. They said you don’t know what they put in that beer and you have to take a drug test if it comes back with alcohol in it you might get a no contest.” 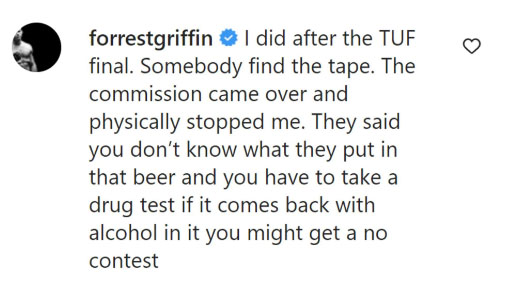 And Griffin makes a finer point – in a USADA regulated world this kind of a thing could become a real issue.  Not that it stopped any of the UFC Columbus attendants recently.