Fake BJJ black belts are their own genre of viral content. Brazilian jiu jitsu as a martial art came from Judo – which has a much more consistent level of progressing through belt levels with the actual professional judoka being mostly only black belts. Meanwhile Brazilian jiu-jitsu is regulated by a For-profit federation which relies on tournament fees and memberships and is largely content to not reinvest in athletes. As a result there’s a number of ‘World championships’ and World champions in jiu-jitsu varying greatly in style and frankly quality.

Not to mention that the International BJJ Federation is just one of the Federations that are out there – with many competitions completely out of the system.

To get to bjj black belt it can take anywhere between 3 years and longer than a decade due to no established criteria and coaching biases. Many mixed martial artists also get promoted straight to a certain rank leaving no room for actual progression through the ranks. Among those promoted straight to a certain rank (brown or black) are Daniel Cormier, Kazushi Sakuraba, Josh Barnett, Randy Couture and more.

Enter Khamzat Chimaev. Chimaev trains in Allstars Sweden under the tutelage of Alan Finfou of a notable bjj federation named ‘Chekmat’. Chekmat is home to many champions including Marcus Almeida Buchecha and Leo Vieira.

Chimaev is only a purple belt – he was promoted to the rank after making it through his clash with Gilbert Burns. It’s interesting to note that in lead up to Burns match he was quoted saying he was ‘more Brazilian’ than Burns.

Chimaev also avoided ground exchanges with Burns like his life depended on it – because well it probably did. Gilbert Burns is one of the rare modern bjj competitors that are dominant in UFC as well. Burns holds notable wins over Kron Gracie and many other contemporary bjj aces.

Chimaev’s coach noted that he is exposing the false black belts after his fourth consecutive victory against a black belt in Brazilian Jiu Jitsu a jibe directed at Kevin Holland. Kevin Holland was awarded his BJJ black belt in June of 2020 under Travis Lutter, a decorated grappler, and former UFC middleweight contender. 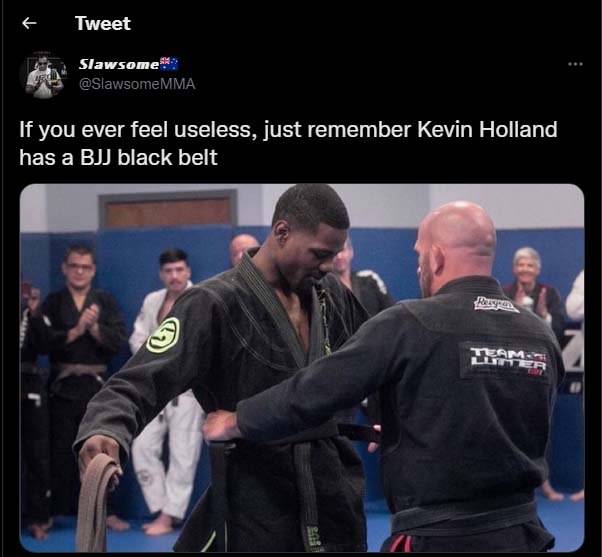 He said on Blockasset:
“I’m making Khamzat expose all the fake black belts in Brazilian jiu jitsu that are in the MMA scenario. Why? Because nowadays, people just get belts like they go to McDonalds.”

” They don’t do the job. He just got this purple belt. How many black belts in his career has he finished? So that shows, that’s about it. I’m using him to expose many guys.”

All four of Chimaev’s UFC opponents were black belts in Brazilian Jiu Jitsu. However, Gilbert Burns was the only one to survive through the first round. Burns squared up against the Russian, taking him down and leaving him covered in scrapes. Nevertheless, Chimaev was declared the winner by a unanimous decision.

Chimaev is likely to wait out for his return to the cage due to a hefty weight miss ahead of his UFC 279 event. Many people are floating an idea of moving to middleweight but there have been no decisions at this time.