Following the contentious UFC 282 main event on Saturday night that finished in a split draw, Ramzan Kadyrov criticized Dana White and the UFC for allegedly engaging in politics.

Jiri Prochazka vacated the light heavyweight title foolishly after going through a shoulder injury during camp. UFC found itself in a bad situation so they opted to promote the co-main event  between Jan Blachowicz and Magomed Ankalaev to the vacant title shot – since Glover Teixeira passed on an opportunity to face a seasoned wrestler like Ankalaev on short notice.

After a rigorous 25 minutes fight, the judges’ scorecards were as follows: 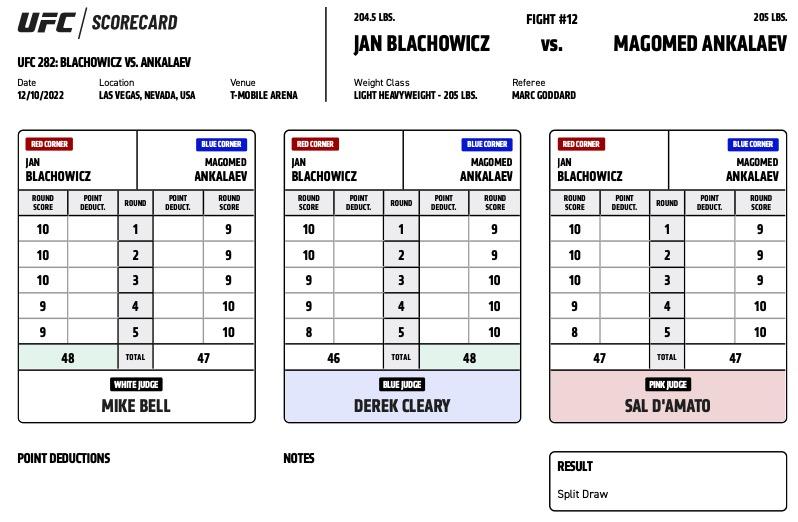 Derek Cleary gave the victory to Ankalaev with a score of 48-46, while Mike Bell scored 48-47 with the victory going to Blachowicz. However, Sal D’Amato scored 47–47 the event to a draw. The announcer declared a split drawr, leaving the light heavyweight title vacant.

According to a tweet from Karim Zidan, the Chechen ruler wasn’t too pleased when Magomed Ankalaev left the Octagon without the UFC championship belt around his waist. Ramzan Kadyrov demanded in an online post that the UFC President give the championship to Ankalaev and apologize for what he saw to be a politically motivated snub.

“Dana White, what happened to you? You were a normal, principled man, and today you took the championship belt out of the ring without handing it to the clear winner. Or has politics entered the UFC ring and requires you to referee dirty? It’s a sport, Dana. Be honest,” Kadyrov wrote.

“Take an example from Mairbek Khasiev (ACA league), who stops any juggling in the league, any bias, demanding objectivity and not mixing sports with politics. Hey, Dana White, where are you going? Save the face of the league, your own face. Admit your mistake, give the belt to the real winner, and apologize for this show. Save your league’s reputation.” 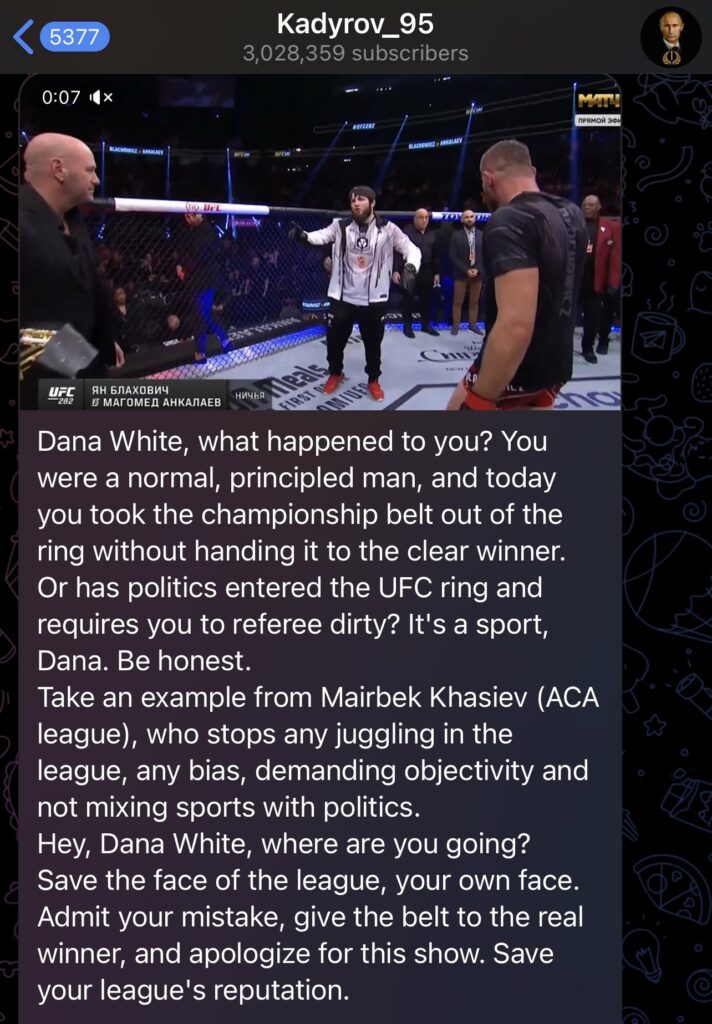 Kadyrov is a supporter of Russia and had reportedly dispatched Chechnya forces to aid with invasion.

The list includes three of Kadyrov’s wives and three of his adult daughters. It also places additional sanctions on the Chechen leader, who has been under U.S. sanctions since December 2017.

He is also somewhat of a professional when it comes to sport washing. He hosted a number of the biggest combat sports stars in the world including Floyd Mayweather, Khabib Nurmagomedov, Kamaru Usman, Justin Gaethje, Henry Cejudo and many more.

Kadyrov is a ruler of Chechnya and a huge patron of mixed martial arts. But he’s also someone who is suspected of orchestrating the kidnapping, torture and death of several individuals in Chechnya. While Kadyrov publicly denies these accusations there’s a track record to speak of. And it doesn’t bother most of UFC stars one bit.