Bryce Mitchell is a bit of an eccentric. Even though he’s undefeated in UFC he most often makes the news with his fringe takes on everything from mass tragedies to flat earth.

Prior to the latest challenge Mitchell got censored by the MMA Hour after trying to hijack an interview and ‘educate’ Ariel Helwani on Confederacy more or less. In the fall out from the interview he went on Brendan Schaub’s show to talk censorship and even guested on the Eddie Bravo podcast.

And while Eddie Bravo is a fan of fringe beliefs the two mostly discussed wrestling, jiu jitsu and the trajectory of Mitchell’s career.

Since then Mitchell has been steadily pumping out bad takes including the time he called out Joe Rogan on social media for sharing a picture of a planet.

He’s stepped it up since then and published a video challenge to the flat earth denier, Rogan.

“Okay. This earth is flat. It’s fixed. And the stars and stuff rotate around us. The sun rotates around us. Okay. And I can prove that. I would love to debate you, Joe Rogan, because I’m tired of you making fun of flat earthers.”

“And if you’re so confident, come on and debate me, buddy, because I’m tired of this crap you’re posting.”

“You want to post a video today about a mathematician that says the universe is local, but it ain’t real? What does that even mean? That’s a bunch of mumbo jumbo crap, brother. And the guy’s holding a trident in the picture. And y’all think I’m crazy for thinking this is a religious thing? He’s holding a trident, a symbol of the devil.”

“They’re trying to feed you these lies to make you think that science is right and that God didn’t create this universe. The Big Bang did. Okay. I used to be an atheist because I used to believe that this universe was created by the Big Bang. ”

“I used to believe all that crap from Neil deGrasse Tyson. Okay. And I’m just so sick and tired of hearing your crap, Joe, about flat earth, flat earthers being stupid.”

“Boy, I’ll smoke you in a debate. I will smoke you and nothing you do beat me in debate, brother, cause you ain’t got no proof. Gravity ain’t real. It’s density. ”

“This paper, when it drops, it’s because it’s more dense than the air around it, not because of some magical thing called gravity. There is no proof of gravity, brother.”

“There’s only proof a density. That’s why hot air balloons float because of hot air being less dense. Okay, not because a hot air balloon is an anti gravitational device. And I will debate you right to your face. And I’m tired of this crap that you’re posted. I’m tired of you making fun of flat earthers because you’ve got one right here that bring it to you.”

“And I know you won’t accept this challenge. Actually, no, I don’t know. But I bet you won’t. I bet your CC out and that crap your post and it’s leading people away from the Holy Spirit. This this universe wasn’t created from no big bang. I don’t care what Neil deGrasse Tyson says. And we didn’t land on the moon and Neil deGrasse Tyson knows we didn’t land on the moon.”

“He’s lying about it, too. Okay. All these people are lying, brother, and all you’re doing is leading people away from the spirit. When you understand that God created this universe, then you understand that there’s no need for all this big bang and this and that. And it’s all a bunch of crap. That’s why the stars, the Little Dipper and the Big Dipper in the same position they’ve always been in, because the universe ain’t constantly expanding.”

Rogan posted this to prompt the challenge: 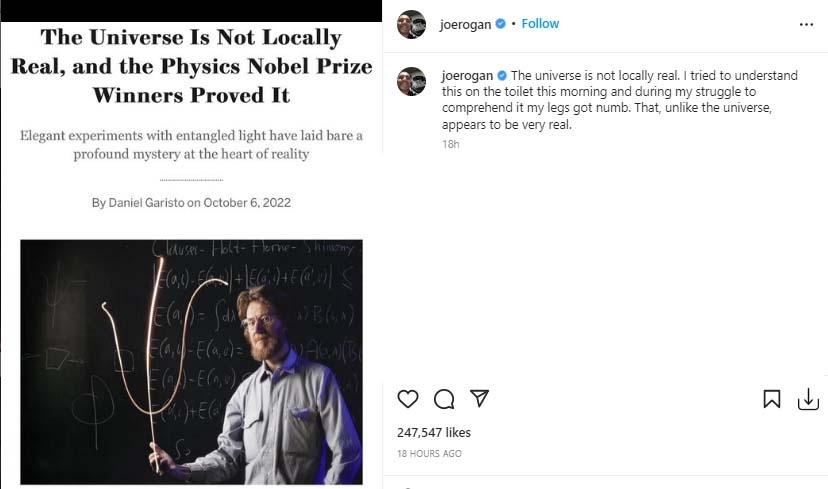 “The universe is not locally real. I tried to understand this on the toilet this morning and during my struggle to comprehend it my legs got numb. That, unlike the universe, appears to be very real.”

The drama started right there with Mitchell saying the trident in the picture is ‘satanic’. 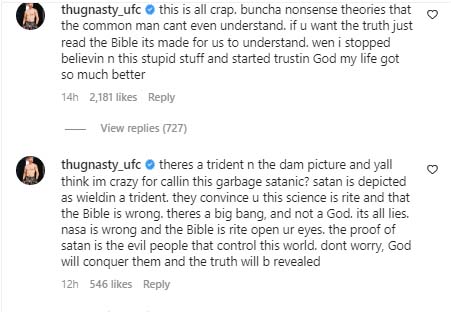 Rogan is a fan of fringe beliefs himself but has drawn the line and even confronted Bravo about the belief on the show a number of times. Typically mellow Rogan once belted:

“You go online, you can look at the pictures. It shows where every f*cking storm cloud is all over the country in real time. So if there’s a storm that’s hitting Cuba, you go to that. You look at that image from that day where the storm is, you’ll see the f*cking storm like it’s all real.”

“If you don’t, believe that’s real, do you believe that someone is so good at hiding s*it that they’ve kept all the images of the flat earth from ever being published that no one has been able to in the history of people that’s been able to travel past the ice wall Into the the nether region of hobbits and gnomes and pixie elves. It’s just mental health. You know, we have a huge problem.”

“It’s lack of education. It’s lack of education. And then it’s also being committed to these ideas to the point where they’re a part of you. It’s this idea, identity, politics. This is what it is when you when you believe in an idea so much that you don’t. And I’ve been guilty of this. I think everybody has at one point in your life you’ve been guilty of not really looking at it for what it is, but instead looking at it for what you want it to be and for what you’ve already committed yourself to believing it.”