UFC rising star Bryce Mitchell is known for his unhinged claims. He recently got another chance to exercise being bold and controversial with his statement on social media.

Bryce Mitchell is a very talented athlete and has a bright future in the octagon. But he is also a bit too engulfed with conspiratorial thinking. The featherweight prospect has made several wild theories in public.

‘Thug Nasty’ won all of his 14 professional MMA outings. He had his first event in the UFC in March 2019 and has gone 4-0 within the promotion. The 27-year-old is currently number 9 in UFC featherweight rankings.

Recently, he jumped on Joe Rogan’s post of another galaxy that was photographed by NASA.

NASA released the image a couple of days ago. It’s an image of Cartwheel Galaxy which they said to be “located about 500 million light-years away in the Sculptor constellation”.

“Incredible photo from the James Webb telescope of a “cartwheel galaxy” 500 million light years away.” Rogan wrote in the caption.

All of a sudden Bryce Mitchell commented with his wild theory calling out NASA for photoshopping their discovery. He also slammed NASA for being useless and wasting the tax money. 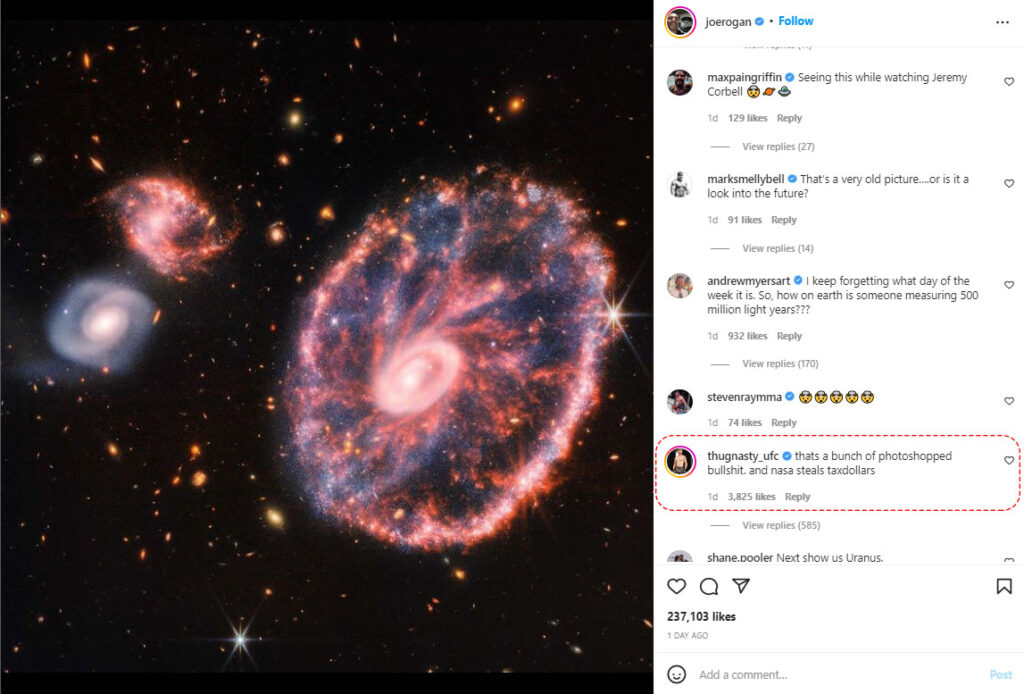 Mitchell surprised a lot of the MMA public earlier last year when he turned the camera onto Ariel Helwani during an MMA Hour interview and expressed a variety of eccentric beliefs that would rock the bedrock of democracy if they were rooted in truth.

Recently Bryce Mitchell went on the Schaub show and discussed an issue that’s currently a hot topic in America – the Uvalde shooting.

“I did a interview with um Ariel Helwani, and I went on there and I said that the the government is doing some school shootings they’re letting some of them happen and they’re also like the Las Vegas shooting- I believe that that was a government collusion. The Las Vegas
Shooting was too suspicious too too many things didn’t line up and anyway so I went on Ariel’s and I said that, okay?”