KSI just defeated Faze Temperrr by knockout in the very first round of their match. The two squared off as Temperrr took the bout on just 12 days’ notice. After the event, the British Youtuber made it clear that Jake Paul is on his list.

KSI spoke about some options after the match. He called out British businessman Joe Fournier and former UFC welterweight champion Tyron Woodley. KSI exclaimed the following:

Slim Albaher could also be an option for KSI. However, he eventually wants to face the “Problem Child” Jake Paul. He’s willing to box against a bunch of people before it happens though.

“I need to be tested, I need more tests until I reach the final level, Jake motherf****** Paul,” 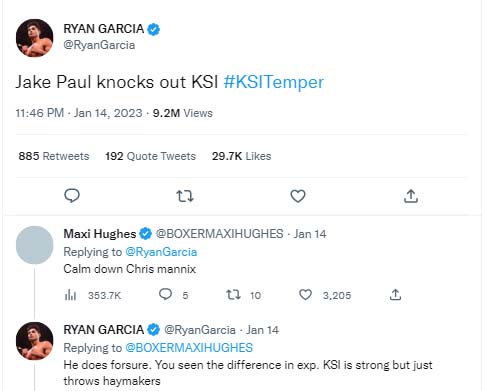 Garcia explained his tweet by stating that KSI is powerful but unskilled: “He does for sure. You seen the difference in exp. KSI is strong but just throws haymakers.”

KSI responded by referring to Garcia’s bout with the lightweight world champion Gervonta “The Tank” Davis. The negotiations between the two boxers have been going on, for a showdown on April 15th.

KSI tweeted in favor of Davis putting Garcia to sleep, saying: “Tank gonna knock you out,”

Garcia responded with a betting proposition between the two: “Down to bet that you’d get flatlined by Jake and I’ll beat Tank. 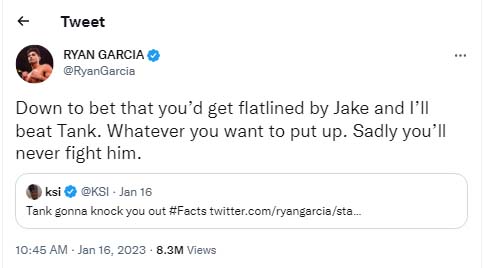 KSI accepted Garcia’s offer by replying: “Whatever you want to put up. Sadly you’ll never fight him.”

The “Nightmare” could be boxing Jake Paul at the end of this very year. His manager has stated that talks between the two parties have already begun.