Former Middleweight champion and current UFC commentator Michael Bisping was recently criticized online for a display of cheer during the UFC bout between Marlon Vera and Dominick Cruz.

UFC Commentary bias has become a hot topic thanks to the barely trying to cover for it Daniel Cormier. But unlike Cormier, Bisping appears to take it seriously.

A slowmotion of the commentary reaction started circling online.

A person tweeted,
“You could see how heartbroken DC was when Cruz got KOd, despite all their past issues. Bisping was jumping like a madman. Shows the character of them after seeing their friend and colleague KOd.”

In response to this tweet, Bisping explained his move showed his passion for sports. He replied,

“It had nothing to do with it being Cruz or Chito. I’m often out of my seat for massive shock ko’s like that. Did I know the people from the contender last Tuesday when I was out my seat half the night? I really get involved. Called passion for the sport mate.” 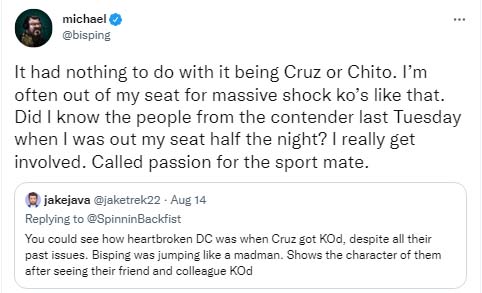 Bisping might be an MMA fan but he’s also become a frequent visitor to the RVCA gym – which we only know due to his buried grudge with Luke Rockhold. The two former MMA middleweight champions burried the hatchet and trained together a while back at RVCA.

Bisping insisted he has repour with both competitors, so he was happy with the outcome. He even acknowledged the legendary career of Dominick Cruz. He said,

“Congrats to @chitoveraUFC for an amazing win. And maximum respect to the legend @DominickCruz I thought he looked as good as ever. Fast, great display of technical abilities. This sport is a bitch though. Well done to all competing, amazing night. The atmosphere was crazy!”

It was not the first time Bisping faced the fans’ backlash for his action in the commentary. He had also faced similar accusations when he called the match between Israel Adesanya and Robert Whittaker at UFC 271. Bisping addressed those accusations in his YouTube video. He explained,

“It was a really close and to all you haters out there that are talking s***, the judges agree with everything that I f***ing said. So, I’m not taking validation from that nor am I using this as an excuse to sit here and say I know it all. I watched a fight very closely, very intently, but I will go away and watch it and see if I made any mistakes. If you hear bad reviews of your work, you want to take it on board with an open mind. I want to get better; I want to learn and grow as a human being.”