Lia Thomas just can’t catch a break. The swimmer formerly known as Will Thomas had just won the 500m freestyle swimming NCAA title but the condemnations keep on coming.

For those keeping score at home, Thomas was condemned by a variety of personalities from all walks of life from politics to sports.

The latest to condemn Thomas’ choice to participate in the women’s NCAA swimming challenges is former UFC athlete Ben Askren. Askren has long been opposed to the woke mob – and as a former Olympic wrestler he’s particularly inclined to weigh in on the perceived inequality.

“If you think Biological males should compete in female division then you don’t understand sports!”

If you think Biological males should compete in female division then you don’t understand sports!

This mirrors the attitudes of many others including doping experts. Current NCAA guidelines allow for hormone concentration that’s 6,7 times higher than that of an average female.

The new proposed guidelines would slash that number in half – but it would still be roughly 3 times bigger than that of an average female.

It was not all fun and games for Thomas – she was repeatedly met with boos and notable silence during the races. To make the whole ordeal even stranger, There was another transgender swimmer in the last race she swam, Iszac Henig. Henig is a female to male trans swimmer that opts out of HRT in order to keep being eligible to pursue swimming in the women’s division. Henig had undergone top surgery and was previously the only one able to defeat Thomas during an Ivy league race.

Both of the swimmers celebrated after the race together. They both showcased the writing on their arms ‘Let trans kids play’. 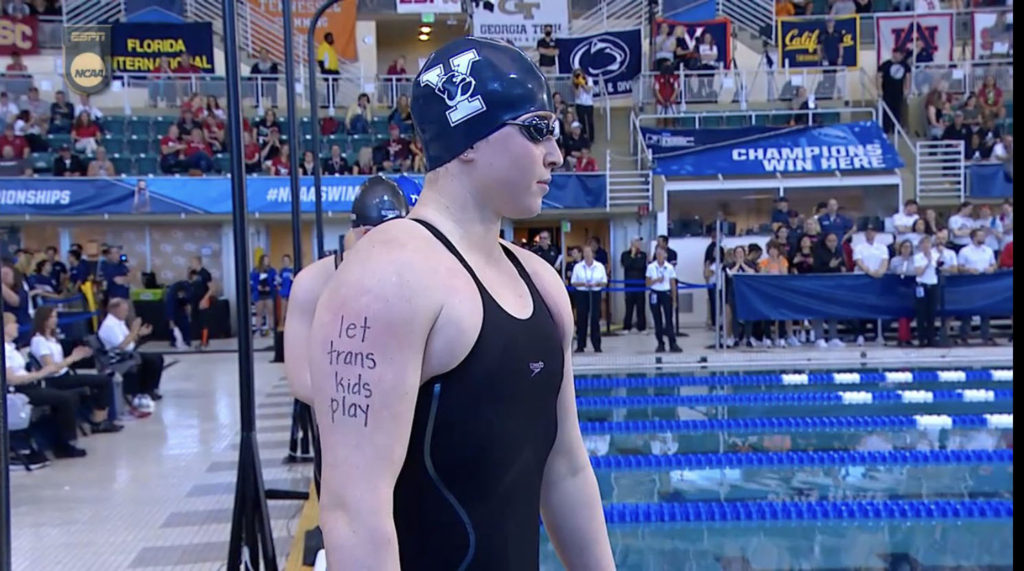 Henig told ESPN after the fact:

‘We’re not allowed to have anything on our clothes, but the rules don’t say anything about our skin,’ he said. ‘So I took the platform I was hoping to have to say that trans athletes are just like any other athlete.’

The backlash has been significantly smaller for Henig – due to the fact that he’s abstaining from HRT.

Thomas was previously condemned by everyone from Joe Rogan to Caitlyn Jenner.

Once Jenner was slammed for this take on social media she replied: ‘No, I just had the balls to stand up for women and girls in sports,’