Fallon Fox first made headlines back in 2013 when it was revealed she had been fighting in women’s MMA despite actually being a biological male.

Joe Rogan was one of her biggest critics at the time and earned his ‘transphobic’ reputation thanks to the comments he made on her case. She’s since doubled down on controversial attitudes and regularly boasts about her success in MMA all the while disputing that any of it came as a result of biological advantages male puberty provides.

Webb’s decision was quickly met with push back. A lot of critics bashed the interview on social media sharing that Fox once boasted about breaking a woman’s skull. “For the record, I knocked two out. One woman’s skull was fractured, the other not. And just so you know, I enjoyed it. See, I love smacking up TEFS in the cage who talk transphobic nonsense. It’s bliss! Don’t be mad”

This is very similar to how another trans female MMA fighter postures on social media.
BBC’s Justin Webb admitted he was in the dark about the ‘dark’ side of Fox and apologized for the feature. 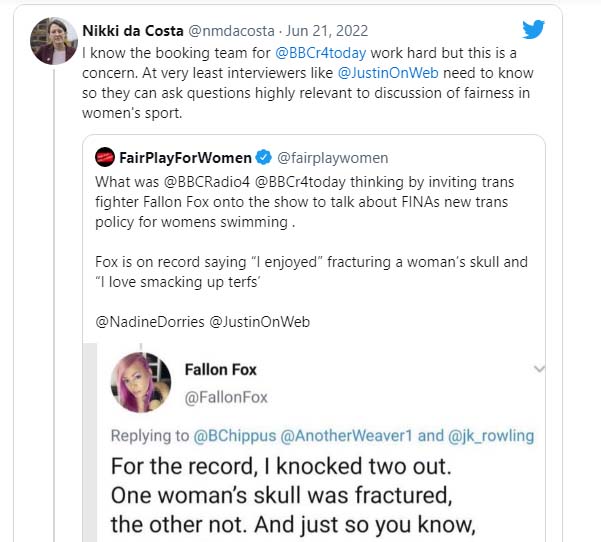 “I think you’re right Nikki. I had no idea (and frankly I am one of the better informed on this subject) and the producers didn’t either. We need to tackle these issues fairly but not from the ‘everyone calm down’ perspective that fails to note who is violent and who is not.”