“Shame on you for picking on the guy who was saying the stuff you were saying for a year. Only difference is he meant it, he felt it, he experienced it. You’re on the outside looking in. None of this pertains to you.”

“To say the things he said, shame on you for being the guy in that moment talking that away from Luke Rockhold. Everything you have said for a year and a half in my opinion is discredited after what you did on Saturday.” 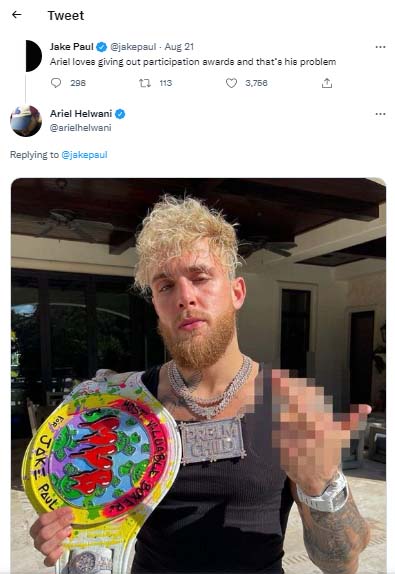 Ariel Helwani further stated that he supported Paul’s public criticism of UFC payment model, but Paul let him down with these remarks.

Rockhold was very vocal in the week leading upto UFC 278 about manager abuses and lack of bonuses, fair compensation and lack of healthcare.

Paulo Costa, Rockhold’s opponent at UFC 278, also criticized Paul for his comments. He stated,
“He [Paul] was just a YouTuber or something like that. I think he did some TV shows, but he came for the fight business and he did great. I need to recognize this… But there’s a big difference to fight wrestlers from MMA and fight strikers from MMA. From my point of vision, he has avoid [strikers]. I could finish his career in TV shows with very serious damage.”

Helwani went on to expose Jake Paul for his UFC themed NFT of which the athletes weren’t compensated despite the initial promise.