Anderson Silva is a former undisputed middleweight champion of the UFC. He owns the single longest win stream in the promotion.

Many include Anderson Silva on their greatest mixed martial artists of all time list but he personally has another name in mind – B.J. Penn. Penn is a former undisputed lightweight and welterweight champion.

During his heyday at the top of the middleweight division of the organization, Silva made an astounding 10 different title defenses. He is scheduled to make an appearance in the boxing ring before the end of the next month in a professional boxing contest against the unbeaten YouTuber Jake Paul.

Penn last competed at UFC 237 in May 2019. He suffered a heartbreaking defeat by way of a unanimous decision to Clay Guida in Brazil. Penn is the Hall of Shame owner of the longest losing streak in the promotion. Penn hadn’t won for 9 years at that point. 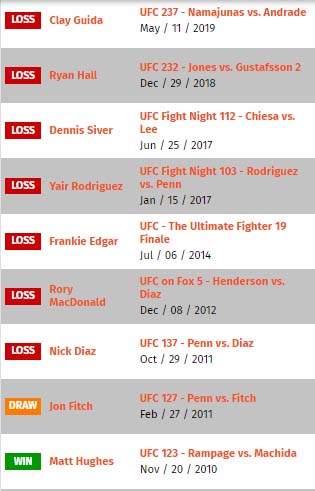 Silva stated during a recent interview with reporter Helen Yee

After joining the UFC in 2006, Anderson Silva went on to defeat Rich Franklin in October of that same year to win the undisputed middleweight championship. He then successfully defended it ten times.

Silva had discussed the possibility of having a farewell MMA bout during the press tour for the event.

Signing off in Japan makes sense for Silva:

“Because it completely makes sense, because I [started fighting] my professional career in Japan. My first title belt I took in Japan in Shooto. And yeah, maybe I want to fight in Japan. My last fight, you know, to prove my respect for the people in Japan, for my fans in Japan, too. And we’ll see. I don’t know.”

Per Ariel Helwani, Scott Coker called Anderson Silva’s rep a couple months ago and offered him a bout with Fedor Emelianenko. No real talks then but now that Silva said he wants one more MMA outing in Japan he is going to reach back out.

As for Fedor, it’s clear Moscow sign off that was initially planned was a nogo so this would actually be a good compromise and a good match up. Emelianenko is 45 years old, Silva is 47 year old. The biggest discrepancy seems to be their weight with Emelianenko being a heavyweight while Silva is considered a GOAT of the UFC Middleweight division.

Emelianenko was quoted saying that his retirement will likely take place in January of 2023 this past summer.

Emelianenko said during a recent press conference. “Most likely, we’ll see. It will take place next January.”

Scott Coker isn’t ruling out the possibility of it being against Ryan Bader.

“He told me he wants to retire, and I haven’t talked to Bader about it. But it’s something, that, you know, it’s hard to say no to Fedor – let’s put it that way. We’ll definitely consider it, but it’s definitely not inked or something that’s imminent. But definitely, we’ll have that conversation.”