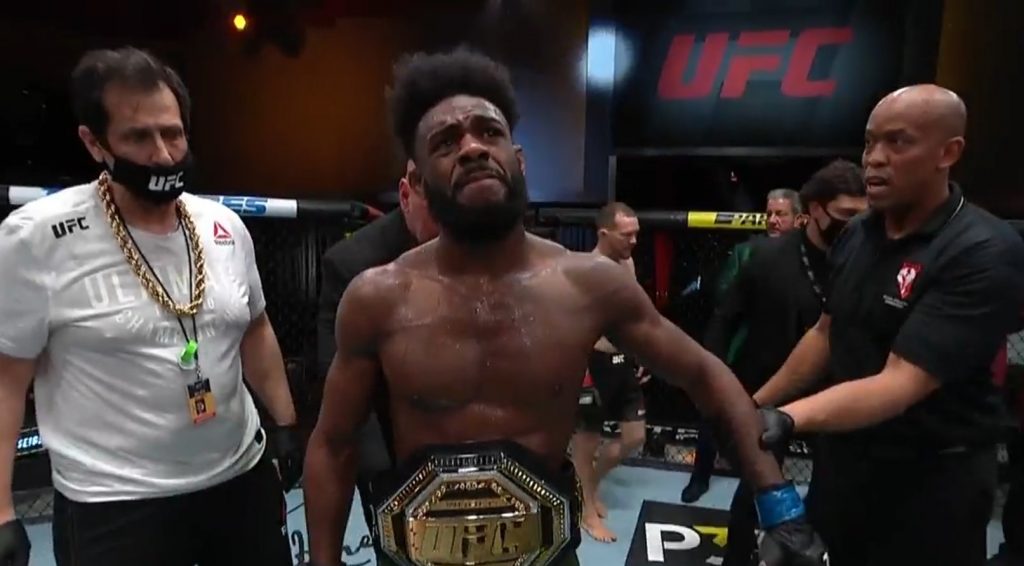 Sterling is quickly becoming neverending comedy fodder. Once a respected title contender succumbed to internet humor after being ridiculed for the acting performance he put on following an illegal knee to the head he received. While Sterling is probably smart to refuse to continue after an illegal shot, his justification of it certainly raises quite a few eyebrows.

And in true Oscar winning actor fashion – Aljo is now thanking God for this outcome.

“At the end of the day, I make out from this. I get paid more. I now get the pay-per-view points and whatever,” Sterling said to Helwani. “So in hindsight, do I want to win the belt like that? Hell f–kin’ no. But at the end of the day, I end up doing better than I actually would’ve. I almost feel like God has given me a second opportunity knowing how hard I worked.

I’m telling you, when you see the demon type of work I put in for those last two training camps with my neck still like that, I feel like god kind of gave me a second chance at like, ‘yo, we’re gonna give you another opportunity to do this the right way and really prove to everyone that you really did deserve to be here.”

“I don’t even know if Aljo’s ever going to come back to be honest,” Dillashaw said Wednesday on The MMA Hour. “From what he had done, it’s kind of crazy. If I was him, I would have waited to get that done. My coaches, my strength and conditioning coach as well as my wrestling coach, sells the medical equipment that did his neck, don’t believe he’s ever going to come back.

“I think he’s just holding onto this belt as long as he can. I’ve had that feeling already so when he pulled out of the fight, I wasn’t surprised. I bet he’s dealing with nerve damage. I bet he’s dealing with a lot of stuff. You go get your neck cranked on with what he’s had done, it’s definitely not good. We’ll see. I could be completely wrong but I don’t know if he’s ever going to come back.”