UFC bantamweight champion Aljamain Sterling ranted about how his UFC 280 performance was perceived on his social media account. Sterling isn’t appreciative of the fact that fans and MMA media attributed his win to TJ Dillashaw’s injury.

Sterling doesn’t have a lot of fans in the first place due to winning the title via disqualification against Petr Yan last year. He faced Yan again at UFC 273 and won via a split decision. Some fans were disappointed by this result as they believed Yan won more rounds.

33-year-old co-headlined UFC 280 last weekend and defended his title for the second time against top contender TJ Dillashaw. He knocked out Dillashaw in the second round. Unfortunately, ‘Funk Master’ failed to prove his skill once again thanks to Dillashaw’s injured shoulder being dislocated two-times.

“This [Dillashaw’s lie] is borderline fraud. That fight was never going to go any other way than it did. You can not even win the UFC that way. If you are part of that guy’s team, and you go through with this, you might think you have noble intentions. But the customers don’t deserve this. They are paying for something that is not that. This is not what they signed up for.” Thomas said.

“What’s fascinating to me is that all you media outlets truly feel had his shoulder not dislocated from my initial TD, or if it was healthy, that it would’ve changed anything. He would’ve kicked. I would’ve caught it. Game over. He might’ve been more reckless and made it easier.” Sterling wrote.

Luke Thomas replied to Sterling’s tweet to clarify that he actually picked him to win.

“Outright picked you to win before. On record. I do think you would’ve won regardless. But it also appears his shoulder was in no condition to fight you. That’s not a slight.” Thomas wrote. 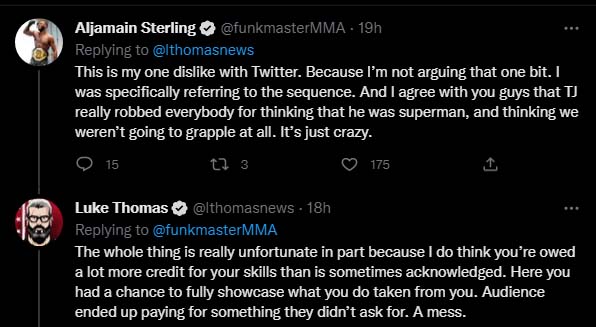 Their conversation continued for a bit.

“This is my one dislike with Twitter. Because I’m not arguing that one bit. I was specifically referring to the sequence. And I agree with you guys that TJ really robbed everybody for thinking that he was superman, and thinking we weren’t going to grapple at all. It’s just crazy.” Sterling wrote.

“The whole thing is really unfortunate in part because I do think you’re owed a lot more credit for your skills than is sometimes acknowledged. Here you have a chance to fully showcase what you do taken from you. Audience ended up paying for something they didn’t ask for. A mess.” Thomas replied.

For his next outing, Sterling is likely to face former two-division champion Henry Cejudo. Cejudo left the UFC in 2020 and is now ready to return and will compete in the bantamweight division. He has been calling out Sterling following his win at UFC 280.