UFC Bantamweight champion Aljamain Sterling was in talks to defend his title against returning champion Henry Cejudo. The two even had a face off at a PFL event they both attended.

The bout was to be scheduled for UFC 285 set to be held on the 4th of March. But no formal announcement has come out and many started to question the match up.

Sterling last defended his title against TJ Dillashaw at UFC 280. Since his win, the reigning champion hinted at taking some time off. This plan became void when UFC revealed they are interested in giving Cejudo the title shot.

Although the UFC had not officially announced the bout, Cejudo and his management had said it was a ‘done deal’.

Sterling just published a video in which he explained his reasoning for not accepting the Cejudo match up in March. Apparently he’s been dealing with a torn bicep through the last two camps.

“It’s whether or not I could compete with this torn bicep again, going through another training camp with a torn bicep against a guy who can who’s stronger in the wrestling department, who will use his wrestling more with inside leg trips, double legs, high crotches, and trying to run the pipe into these lifts where, T.J., probably, you know, he just shoots and does the strips is a little bit different.”

“I’m going to need this bicep to compete at 100%. And I don’t take Henry Cejudo, lightly, even though I did lay out all the ways that I could win and do that for 25 minutes, I got to make sure I’m in shape.”

Later on he added:

“Where now, if I completely snap it, I have to get surgery. So it’s like when I weigh up my pros and cons, I’m like, it’s a very tough decision to make.”

Meanwhile Cejudo had a funny reaction to some food bloat pics Sterling posted. 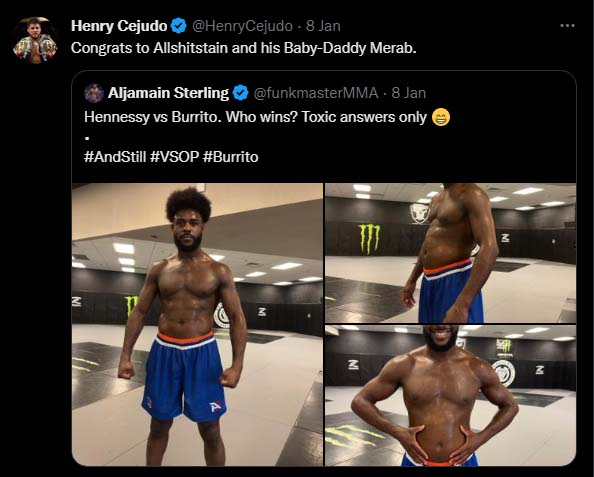 Sterling also went on to cast doubt over Cejudo’s PED status during his absence from the USADA pool.

“His body is going to be physically feeling good, doing all the stuff that God knows why he was out of the testing pool. Who knows what he was doing to his body? He had some shoulder injuries as well and things that he was dealing with. Ask him and look at him full happy. I wouldn’t be surprised if he went back to Colombia or wherever and got some stem cells and maybe got some other things.”