UFC light heavyweight contender Alexandar Rakic revealed he had hurt his knee prior to UFC Vegas 54. The Austrian Serbian also believed he was in the lead on the judges score cards for the first two rounds.

UFC Vegas 54 was headlined by a light heavyweight bout between Jan Blachowicz and Alexandar Rakic. Rakic was clearly faster and more athletic – but neither him nor Blachowicz would check kicks. While Blachowicz got more disciplined as the time went on – Rakic got injured in process.

Unfortunately for Rakic, the event ended with a visible knee collapse in the middle of the third round.

Soon after, the 30-year-old took to his Instagram account to reveal that he had the injury during his training at the camp.

“A great battle took place in the octagon tonight but unfortunately it ended not the way Jan and I or the fans wanted. The same damn injury from 3 weeks ago in camp showed up again tonight.” Rakic wrote.

Rakic also believed he was leading the score, especially in the second round. His estimate was off. 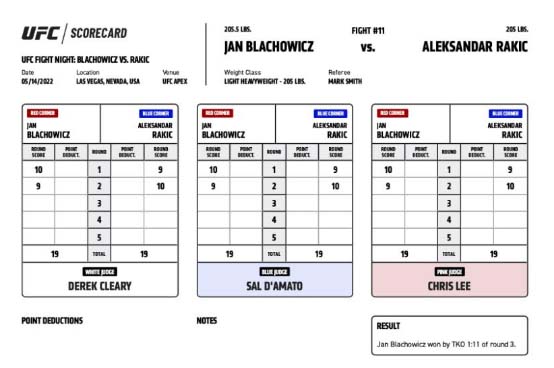 “I felt I won both rounds, round one being close but round two was just mine then I opened up really good even in the third before my knee buckled.”

“Knowing the fact that my cardio was off the chart ( with a heartbeat at 36 in sleep ) I would start to picking him apart from third round on but it is what it is.”

He went on and closed the caption by congratulating Blachowicz and asked the UFC to give him a rematch.

“Congratulations to Jan and I wish him the best. I will take care of this injury and come back like you never seen me before. This is an unfinished fight between Jan and I and I really hope @ufc gives me a REMATCH.”

According to a physician, Rakic’s ACL was compromised.

“Of course, Rakic’s lead leg – his left leg – was getting beaten up all night by Blachowicz, but this was actually the right leg. If you look closely, here, you can actually see the pop. What we’re seeing there is essentially the tibia, or the shinbone, that’s displaced forward or anterior, and all of a sudden right there, pops back into its proper position.”

“This anterior tibial translation and that shift that we see backwards, is an ACL injury until proven otherwise. This is actually the similar position to what we see with sports like basketball or football when somebody is running and then they jump or they cut.” Brian Sutterer, a Mayo Clinic doctor shared on his youtube channel.

Rakic is not the only one who suffered an injury prior to the last fight. In February, his opponent Jan Blachowicz suffered a neck injury. This neck problem led to Blachowicz pulling out from the fight which was supposed to be in March.

“I woke up with a pain in my neck. I think that maybe it was a bad sleep or something like that. But the pain doesn’t want to let go. I remember we did some light drills and my friend kicked me on my head. And then I feel, I cannot feel my all left side.”