The famous American Actor Jason Momoa just endorsed BJ Penn for Governor of Hawaii. The political career of BJ Penn started in 2019, thanks to the Covid 19 pandemic. While BJ Penn is unsure about any of his policies he does have radical takes on the pandemic that tend to run on the funny sides.

Among them is a belief that the pandemic issue is the ‘number of the beds’ and that to solve it all you need to do is to use the beds in the homes of Hawaiians.

Jason Momoa is not the only high-profile person who supports BJ Penn. The famous UFC commentator Joe Rogan, MMA Fighter Nate Diaz, and Politician and ROTC veteran Tulsi Gabbard are also among the people who support him. 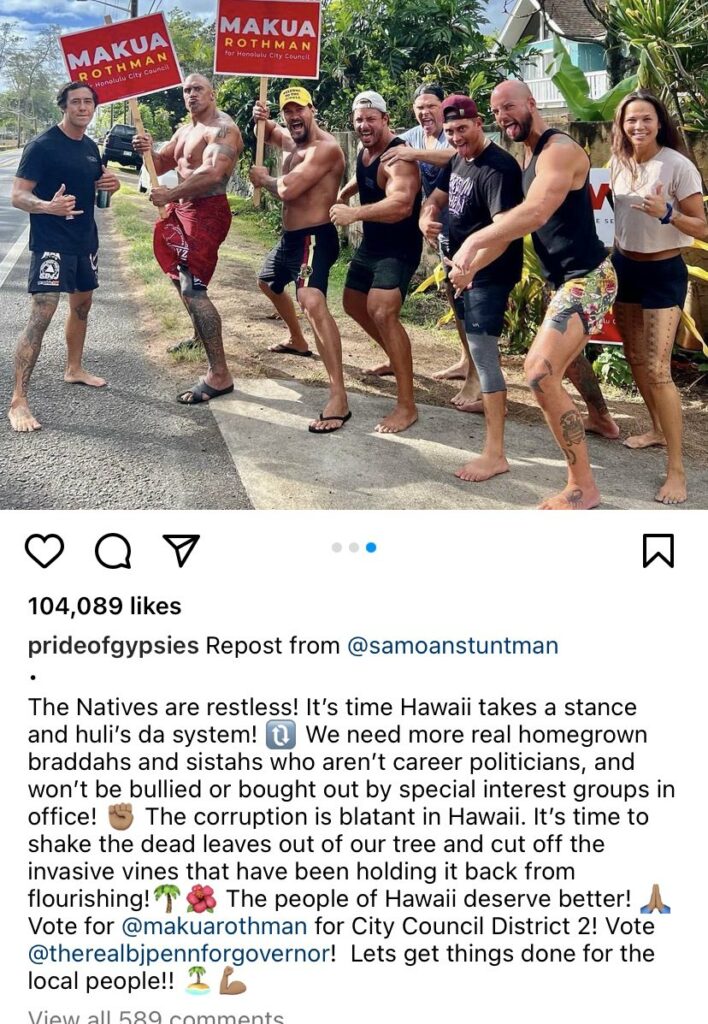 Jason Momoa posted on Instagram,
“The Natives are restless! It’s time Hawaii takes a stance and huli’s da system! 🔃 We need more real homegrown braddahs and sistahs who aren’t career politicians, and won’t be bullied or bought out by special interest groups in office! ✊🏽 The corruption is blatant in Hawaii. It’s time to shake the dead leaves out of our tree and cut off the invasive vines that have been holding it back from flourishing!🌴🌺 The people of Hawaii deserve better! 🙏🏽 Vote for @makuarothman for City Council District 2! Vote @therealbjpennforgovernor! Lets get things done for the local people!!”

This is Penn’s first political campaign. He was previously active as a mixed martial artist for a number of years and has a number of gyms on the island.

While many high profile individuals support his political aspirations UFC went through the troule to blur out his political t-shirt during recent PPV event BJ Penn attended.

He stated in an interview with Rogan,
“When I first got it decided to get into [politics]. I was just retired. So, I wasn’t trying to keep my everything perfect in public. I was just running around. I was just a guy trying to come off of a 20-year journey of being the baddest man on the planet.”

BJ Penn’s campaign thus far proves the value of name recognition in addition to having a professional team around yourself. Penn has been reluctant to engage his rivals in unscripted debates and has instead resorted to campaigning at sports events and such. This is working for him. Pollsters have him as the runner up in the GOP race – coming behind former Governor Duke Aiona.