Conor McGregor was probably looking forward to a brand new year and his UFC comeback. But now a fan has reminded everyone of the time Conor was brutally roasted by Khabib Nurmagomedov.

In May 2020, The Notorious made a tier list of the greatest MMA athletes. He predicted that by the end of his career he would probably be the best of all time.

The Irishman then wrote that Georges St-Pierre and Jon Jones would be third and fourth, respectively.

“GSP is in at 3. Much less array of finishes but champion status in 2. He is far behind though. Reasons = Left 170 after much damage taken+questionable decision. Never re-engaged 170lb successors. Bottled Anderson fight. Only moved when one eyed fighter presented. Played safe. 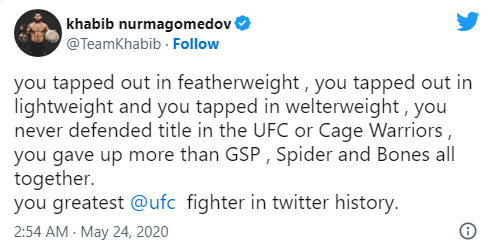 Jon Jones added insult to injury after he tweeted a list of athletes with most wins in UFC title bouts. Jones wrote: “Goat where you at”

Conor McGregor is usually a beast when it comes to trash talk on social media. But Khabib might just have him beat.