Hasbulla Magomedov has been continuously trolling McGregor for years and apparently only now got a rise from the Irish sports star.

McGregor brought his inner brute in front of the MMA world while replying to Hasbullah. He said, “I’d love to boot that little g**p Hasbulla over a goal post.”
“How much to get him on the volley? I’m gonna make it my mission to score a 3 pointer with him one day, hon the gaa.”
He further insulted Hasbullah by calling him a “Little smelly inbred.”

McGregor deleted those tweets because maybe he understood how those tweets could be interpreted. The screenshots of the tweets are viral on social media.

Alexander Volkanovski spent some time with the Dagestani star recently and quickly jumped in to defend him. He stated,
“You’ll have to go through me first, leave my mate alone.”

Not to be outdone, Hasbulla dunked on McGregor saying:

Hasbulla wasted no time in hitting back at the Irishman.

“I don’t follow bums… didn’t know someone was running their mouth. @ me next time Conor McGregor,” Hasbulla tweeted. 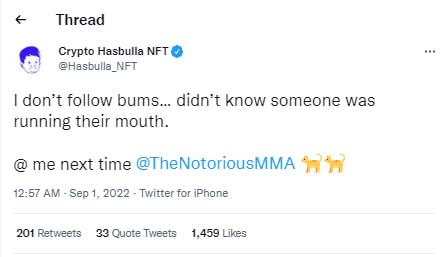 “At least least one of us kept an undefeated record. Hasbulla 1. McGregor 0.”

“I have my ufc contract now, if Conor McGregor is really a man… see me in Abu Dhabi Got smashed by Khabib Nurmagomedov already. Guess his money from Mayweather ran out and he needs more attention”

It is a pretty exciting development because Volkanovski is the current Pound for Pound champion of the UFC and lords over the division that was once McGregor’s feeding ground.

McGregor is still recovering from an injury; but a return against Volkanovski would be interesting even at 145lbs.

“I’d kick this Volkanovski head off like it was a rugby ball I was kicking. 5’4 and full of muscle! Hahahah little fart he is. Not even a little fart. A shart hahahah jackass.”

Upon asking about his views on McGregor’s comments, Volkanovski said,
“I heard about it. Sounds like he’s on the piss. Good on him, I will be too,”

“It’s Conor doing Conor things, good on him. I don’t know if he wants to come back down to 145 (pounds) – well, obviously that’ll never happen.” He added.