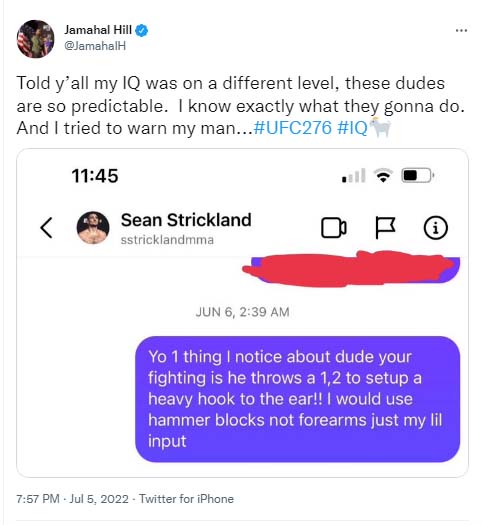 Alex Pereira became a new favorite following his performance at UFC 276 against the controversial Sean Strickland. The former Glory Kickboxing champion knocked out Strickland with his deadly left hook two minutes into the first round.

Sean Strickland was doing pretty well against the kickboxing phenom in a ‘stand and bang’ fight. Alex Pereira had tricked Strickland into lower his hands by shooting at his chest. Right when Strickland lowered his hands, Pereira delivered the deadly hook. This victory marked his 6th win in a row in his professional MMA career.

Following the event, Jamahal Hill took to his Instagram account and shared a screenshot of his message to Strickland. He warned Strickland about Pereira’s strategy and signature move which was the exact strike that knocked Strickland out.

“Yo. One thing I noticed about the dude you’re fighting is that he throws one to two punches to set up a heavy hook to the ear! I would use hammer blocks and not forearms. Just my little input.” Hill wrote to Strickland in Instagram DM.

The 31-year-old athlete shared the screenshot and boasted about his intelligence.

“Told y’all my IQ was on a different level, these dudes are so predictable. I know exactly what they’re gonna do. And I tried to warn my man.” Hill wrote on an Instagram post.

A lot of fans were shocked by this and praised Hill for his sharp prediction. They compared Hill to Nostradamus who is famous for predicting the future.

Jamahal Hill last seen inside the octagon was when he headlined UFC Vegas 48 in February. ‘Sweet Dreams’ took on Johnny Walker and finished the Brazilian athlete within 3 minutes into the first round. Hill is now set to face Thiago Santos at UFC on ESPN 40 in August.