Paulo Costa is one of the funniest people in the UFC. Everything he does or says turns into a meme and he knows it. Costa recently shared a hilarious edit, which shows UFC president Dana White falling for his ‘thirst trap’.

“Borrachinha” shared an edit of Dana White at a press conference. The presser in question is his post UFC 278 media interview. During the interview, White was phoned by Usman who wanted to get in touch with UFC boss and make sure he gets the chance to rematch Edwards.

The clip has been edited and the new version shows Dana reacting to a faux thirst trap from Paulo Costa somewhat shyly. As expected, fans are loving it.

But this isn’t the first time that Costa has fried Dana on social media. He once shared an article with his large Twitter following, covering Dana’s mother’s allegations against her son. 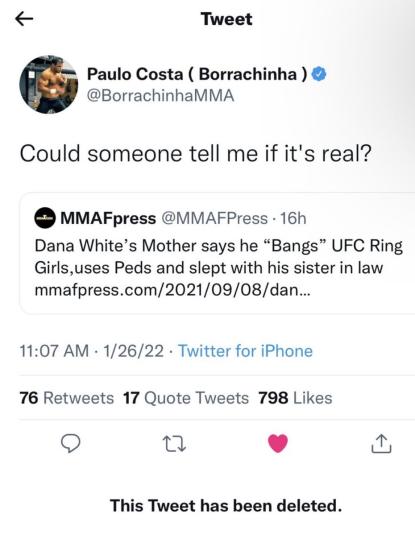 He followed this up by infamously posting a photoshopped image of Dana with Rose Namajunas. ESPN Brazil even thought it was real and they even covered it in a story.

It became so controversial that it even prompted Dana to ask him to delete it. Costa did delete it from his Twitter feed but he put it as his cover photo, highlighting it even more.

In the past couple of months though, things have been a lot more serious between Costa and the UFC. Ever since his last matchup against Luke Rockhold at UFC 278, he has been refusing to compete, demanding a better contract.

As a result, the Brazilian has been engaged in heated negotiations with the company. Costa was even advertised by the UFC to headline against Robert Whittaker at UFC 284.

However,  he said that he wanted nothing to do with the event until his demands were met.

Costa accused the UFC of using underhanded tactics to get Brazilians to compete against highly rated opponents for small sums of money. He said that he wanted to face Whittaker, but for a higher amount than what they were offering him.

According to Costa, he wanted $500k to be in the co main against the former middleweight champion in Australia. The UFC on the other hand wanted to offer him the same amount, but for a total of 6 bouts on his contract. Right now, his deal only pays him $70k to show and another $70k to win for his next outing.

Costa has been slammed by fellow middleweight Sean Strickland. Strickland has called him a “f*ckhead” and has blamed Costa’s ‘unprofessionalism’ for failing to get a nicer contract.