Jose Aldo is definitely one of the greatest MMA pros that have come out of Brazil. But Aldo’s legacy suffered greatly in that 12 second knock out he suffered from Conor McGregor at his peak.

Many MMA insiders including Khabib Nurmagomedov might agree that that was a singular moment in time when mixed martial arts peaked and broke into main stream. The legendary KO was certainly everywhere and there are seldom any people that haven’t seen it at this point.

What many might not realize is, Khabib was present in the arena for the event and had an epic reaction to the action he witnessed first hand.

Khabib appeared to be the most affected of the three. He puts his hands on the head and visibly cringes at what just happened. He also greeted Dana White who happened to walk past him moments later.

Way back then, McGregor and Khabib were cordial. Things between them wouldn’t turn sour until the clash between the two became a reality. 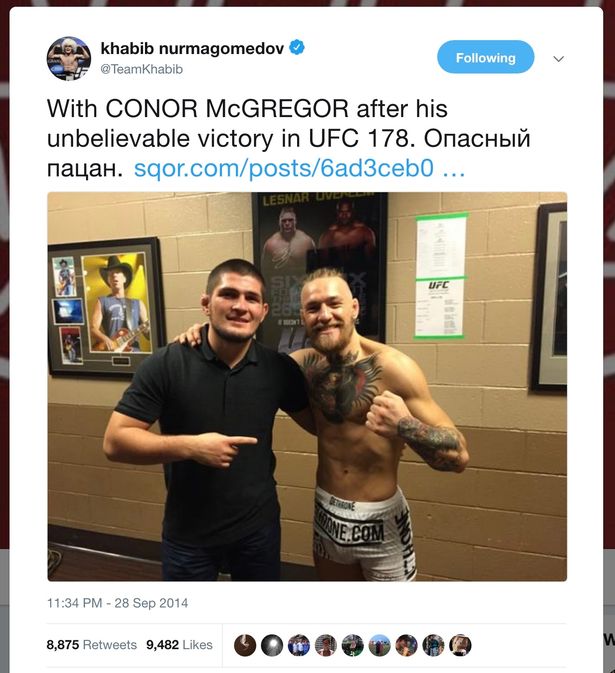 “That shows that you’re not at your peak,” Nurmagomedov continued. “If you’re getting hit and you’re conscious and you’re not defending yourself, I call those fighters businessmen. They come out to make money.”

Aldo also revealed he had been offered an interim lightweight title fight against “a guy we never thought would turn it down,” who then “turned it down, because his father didn’t think it was good.”

“I was traveling when [my coach] ‘Dede’ [Pederneiras] called me,” Aldo said. “The [UFC] had offered me this fight and we took it. I said, ‘What? I want that, I’m in.’ I respect everybody, but that opportunity … I was the featherweight champion, and [Nurmagomedov] didn’t think it was a good [idea]. I don’t know if he was expecting to fight somebody else, I don’t know what he was thinking at the time. I think it could have been a great fight.

“I wanted to test myself. Everybody always asks me. … It’s funny, everybody thinks I train wrestling a lot. No, man, I usually do the same training with my team, so, to me, it would have been a really tough test. I’ve always fought against American wrestling and it was hard to take me down, so it would be a tough test against him, if he would be able to impose his takedown game against me knowing that I have pretty good takedown defense as well.”

While Nurmagomedov’s cult status is unmatched today – he actually only became lightweight champion following a last minute match up against Al Iaquinta in April of 2018. He would go on to fight just 3 more times in his career before retiring following his father’s passing.